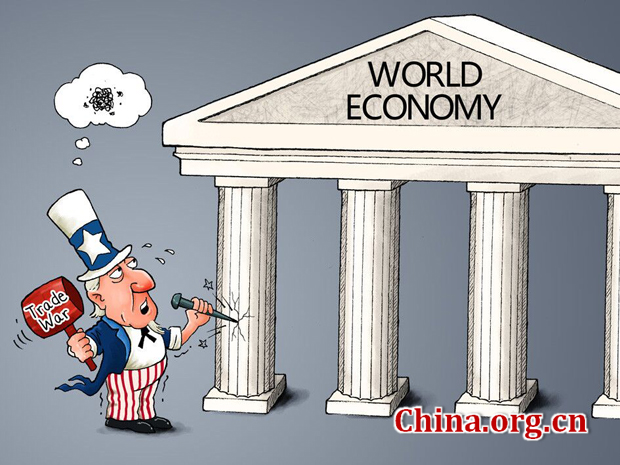 The United States seems willing to start a trade war with China.

Candidate Donald Trump is still the dispatcher in the Oval Office. Rarely appearing is a President Trump, measured and willing to listen to his advisers and, above all, aware of the enormous responsibility of his position.

The trade war against China undertaken by Washington confirms this. The world is currently reeling because of the president’s strict compliance with one of his campaign promises. He decided yesterday to increase tariffs from 10% to 25% on thousands of Chinese products − about a third of what Uncle Sam buys from the eastern nation. The decision was made after the failure of negotiations between delegations of both countries on Thursday and Friday in the U.S. capital.

The terms set by the president from the north, although alarming, are not surprising. His tendency in terms of behavior in these situations is well known: to follow the same guidelines he followed as a businessman. Everything indicates that, after having attained the most powerful position on the planet, he is still unable to understand the difference between the two spheres.

His trademark, as a tycoon, was to barge in. But what is now at stake is not business, but the welfare of millions of people on multiple latitudes. It should be remembered that, in these situations, lines of communication exist − which explains the reaction of the global markets.

Back to the story: We must remember that last year, in September, the United States had already levied a 10% tariff on 5,745 Chinese products, with the threat of raising it to 25% by 2019, if Beijing did not negotiate. There was negotiation, but it was non-productive, despite the direct line still in place between Trump and Xi Jinping.

Now, attention is focused on China’s response: Is the dreaded trade war between the giants already a fact? The Asian country, in addressing this, has announced only that it will take “necessary countermeasures.”

The uncertainty about the Chinese response contrasts with the certainty about how such a confrontation would be a heavy and unfortunate burden on global economic growth, as the International Monetary Fund has warned. And, as the saying goes, wars know how to begin but never how to end. In this case, an escalating confrontation could leave collateral victims all over the planet.

Colombia is beginning to feel the lash of the crisis. The most obvious effect is the rise in the price of the dollar, which has reached around 3,300 pesos, despite the fact that the price of oil − its main source of external income − is reasonable.

However, the biggest risk is that a protectionist wave will arrive, leading to a reduction in market access for our products. This requires raising the alert level. We are more than spectators in this dispute.