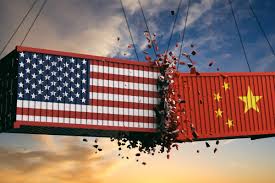 U.S. President Donald Trump has clearly taken a firm stance to a degree hitherto unseen regarding his sanctions against China.

First, Trump put in motion a huge increase in punitive tariffs on about 22 trillion yen (approximately $200.8 billion) worth of Chinese imports, from 10% to 25%. The 25% duty had been imposed on only 10% of the total, but in one step he expanded it to almost half.

Furthermore, Trump said that he was beginning the process of expanding the tariffs to all of China’s imports. China also announced it would retaliate, and there is a danger that this will turn into an all-out trade war.

This has escalated so much due to the deep-rooted confrontation between America’s and China’s differing political systems.

When Trump was inaugurated as president two years ago, the main item in his anti-Chinese agenda was the trade imbalance. As usual, China managed to respond by striking a commercial bargain and relieving pressure.

But in a speech last fall, Vice President Mike Pence revealed a policy of comprehensively restraining China’s expansion through both diplomacy and security.

This is due to an increasing sense of alarm that China is challenging American supremacy in advanced technology directly connected to the military. It has gone past the level of a simple trade agreement and become a serious matter of contesting global economic and security supremacy.

In recent Sino-American negotiations, the problems the U.S. had with China were structural.

One was the forced technology transfer by American firms in China to benefit the next generation of Chinese industry.

China enacted laws banning this coercion, but the U.S. has demanded that sanctions be imposed if these are violated. China objects to this as an infringement on its sovereignty.

Another problem is that China grants enormous subsidies to next-generation industries.

Cooperation between the government and the private sector in industrial development has become a source of Chinese growth. Abolishing subsidies might shake the foundations of state capitalism. It’s also part of the Communist Party’s one-party rule; this is a point they will not concede.

Japan and Europe have also criticized China over these issues as violations of international rules. China must work on reform. On the other hand, if it is resisted forcefully, the global order will be significantly destabilized.

If the Sino-American confrontation intensifies, it might lead both countries to create exclusive economic blocs. Yet partitioning the world will only throw the economy into turmoil. It is unacceptable for America to involve the rest of the world in this only to reinforce its hegemony.