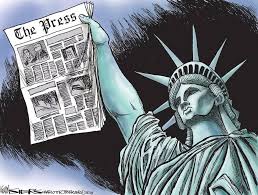 By deciding to charge Julian Assange, the founder of WikiLeaks, with espionage, U.S. courts demonstrate a worrying desire to control information.

Donald Trump does not hide it: He hates the media. He vilifies them on social media, singles them out for condemnation by his supporters at electoral rallies and regularly describes them as “enemies of the people.”

However, the president of the United State has just delivered an attack of a completely different nature against the freedom of the press. On Thursday, May 23, the U.S. Department of Justice announced that it was charging WikiLeaks founder, Julian Assange, with espionage for having obtained and disseminated secret military and diplomatic documents in 2010. In order to justify the 17 new charges against Assange, an Australian citizen currently detained in Great Britain and whose extradition is sought by the United States, the U.S. courts invoked a 1917 law against espionage, adopted during World War I.

Many of the Pentagon and State Department documents obtained by Julian Assange were sent to five international newspapers (The Guardian, The New York Times, Le Monde, Der Spiegel and El Pais), which worked together to analyze them and, before publication, conceal the identity of individuals likely to be put at risk. Revealing information about the behavior of U.S. forces during the Iraq War, civilian casualties, the treatment of detainees and U.S. diplomacy were brought to light. An American soldier, Bradley Manning (now Chelsea Manning, following a sex change), was sentenced to 35 years in prison in 2013 for passing these documents on to WikiLeaks. President Obama commuted the sentence in 2017, but Chelsea Manning has since returned to prison.

Assange was already facing a much less serious charge in the United States, that of hacking government computers. The new charges against him do not focus on his method of acquiring the documents, but the motivation behind his actions: the U.S. government has accused him, not of revealing the truth to ensure public transparency, but of espionage.

The Obama administration had debated this option for a while before abandoning it.

The potential implications of these charges are very serious. They go far beyond Julian Assange, whose behavior, after the brief collaboration with the media in 2010, is far from irreproachable: They indicate that any publication of secret U.S. government documents could be treated as espionage.

The heads of mainstream American media are not wrong on this subject. The editors-in-chief of The New York Times and The Washington Post, in particular, immediately pointed out that American journalists have always exposed government mistakes and abuses of power with the help of classified documents. The most famous case is that of the “Pentagon Papers” and what they revealed about the Vietnam War in 1971.

According to the two newspapers, the Trump administration’s actions go to the very heart of the First Amendment of the Constitution, which protects freedom of expression. As a partner of The New York Times in the publication of the WikiLeaks documents in 2010, Le Monde joins these protests.

It is worrying that the United States is part of a growing number of countries seeking to control information.