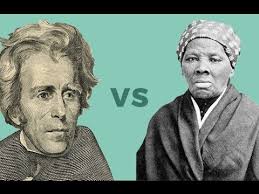 The Trump administration refuses to replace the image of President Andrew Jackson on $20 bills with that of Harriet Tubman, an African American abolitionist.

In 2020, the event was supposed to honor the 100-year anniversary of the women’s right to vote in the U.S. But the Trump administration has decided otherwise. Symbols are no joke. The Treasury secretary announced on Wednesday that there will be no new $20 bill featuring Harriet Tubman before 2028. In other words, never.

A powerful campaign led by citizens had convinced the Obama administration to replace former President Jackson with this African American woman who was a slave. She became an abolitionist and a legendary figure in the United States, and founded the underground railroad, a network that helped thousands of black people escape the slavery of the South. Honoring this woman disgusts the Trump administration. Refusing to print this new bill is a slap in the face for women and minorities. A slap for women, because despite the fact they have been able to vote for a century, Trump is probably the president who has been the most insulting to them.

Two 19th century women briefly had the privilege of appearingon bank notes, Pocahontas and Martha Washington, but only men have appeared since. It is a slap in the face for minorities, because Jackson was a fervent supporter of slavery, a hero of the white supremacists Trump wants on his side in the cultural war he is leading against a multicultural America. Removing Jackson from the bill that is used most often in the U.S. would betray Trump’s supporters. But this could backfire for Trump him in the 2020 election if Kamala Harris, a black woman candidate, is elected.