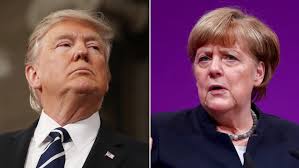 It may have been flattering when Angela Merkel was greeted at Harvard as “Chancellor of the Free World.” But one can hardly be marketed as such when, given Donald Trump’s desire for revenge and retaliation, other qualities are required.

It is less routine than ever to note that Germany and the United States are close partners and that this partnership is indispensable, not least on the issue of security. But it is also true that this relationship has taken a turn we cannot ignore and that raises doubt about whether the foundation can resist pressure over time.

The list of points of disagreement grows increasingly longer; it reaches from German defense spending to American policies on Iran and trade. There are conflicts with longer histories, whereas others are comparatively new. But there is no doubt: since Donald Trump, who enjoys directing attacks against allies and particularly against Berlin, has become president, much discord and many contradictions have piled up.

A Minor Catastrophe for Germany

It is about individual political fields, but it is also about the basics: about the principles of order in global politics. The truly worrying aspect, especially for us, is that Germany and the United States are growing apart.

The chancellor publicly noted these contradictions at Harvard University, before a large audience: multilateralism here, unilateralism there; free trade here, protectionism there; openness here, wall-building there. And so on. America’s departure from the principles of liberal order, of which the United States was, for decades, the guardian – which, in contrast to what Trump claims, also served its interests – is a minor catastrophe for midlevel power Germany.

The West is losing its anchor; the global economy, in which Germany is more deeply integrated than few other countries, is being rattled by Trump’s erratic policies and his desire for revenge and retaliation. Not every accusation he voices is unwarranted, but his methods are like acid for relations. The tariffs that have been announced on imports from Mexico demonstrate how much the recently concluded trade agreement means to this president.

But we ourselves cannot take the “anti” route and become anti-American. As before, we need to lobby for this relationship, search for commonalities and defy the disappointments. And, as flattering as it may be when Merkel is greeted at Harvard as “Chancellor of the Free World,” one can hardly be marketed as such when, given the disorder in the world, loyalty to both Western values and political robustness is needed.