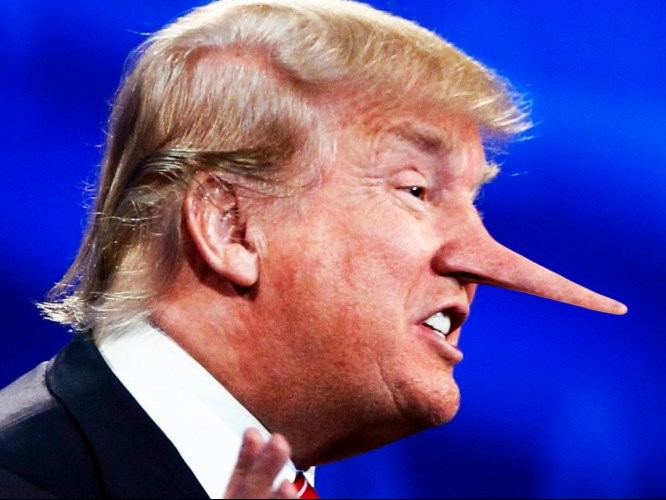 Democratic debate in the United States has become undignified. It no longer reflects the values of its institutions, its Constitution or its spirit. Since his inauguration in January 2017, Donald Trump has thrown his country into a state of moral, ethical and political decay; only the economy is protected. No truth is sacred, not even in math. Lies have become second nature; denials, a culture. Total confusion between fact and opinion has become the norm.

From the moment the new president took his oath, it was understood that the most rudimentary reference points would no longer be valid. Because quite simply, there would be no more reference points. And so the truth would step aside, to the benefit of multiple truths that abound like so many different points of view. The first presidential controversy arrived the day after the inauguration ceremony. Trump asserts that more people attended his ceremony than Barack Obama’s. Factual error, verified by a count that leaves no room for doubt. No trouble for Trump. His spokesperson explains that the president’s statement offers “alternative facts.” The die is cast. Alternative facts, also known as lies, are placed on the same footing as the presidency of the U.S.

Before the billionaire, other presidents fought fierce battles with the press, lying without shame. Richard Nixon, forced to resign after the Watergate scandal, is the most striking example. Never before, though, has the flagrant lie been used on such a scale and have the blows been so low, and at such a frantic pace. The White House broadcasts fake news on streaming. At last count by The Washington Post, Trump had just broken the 10,000 lies and false statements barrier. The ultimate irony is that it’s the president who accuses the media of lying on an almost daily basis. And unlike the latter, he never backs it up with proof. Like a child, Trump systematically brackets the name of the media group or journalist with two words: “Fake news.”

Mockery has become the hallmark of this presidency. It’s an integral part of the communication strategy at the heart of Trump’s politics. The nadir was reached when the president declared in a tweet that The New York Times was “a true ENEMY OF THE PEOPLE!” A serious accusation, unprecedented in a country with a free press, which echoes the rhetoric of Joseph Stalin. A declaration of war but, above all, a declaration of hate, the insult being another weapon in his political marketing arsenal. Lies and contempt. The cocktail is devastating. The gulf between the two Americas, that of the conservatives and that of the progressives, has never been wider. The 24-hour news channels are stuck along the same fault line. On one side, Fox News, under Trump’s thumb; on the other, CNN and MSNBC, clearly in opposition. The newspapers are also divided into pro- and anti-Trump. The two historic giants of the political press, The New York Times and The Washington Post, are positioned on the left. Their respectful investigations, which abide by the rules, remain of a remarkably high quality. But the staggering number and necessary organization of relevant documents is matched only by the avalanche of tweets from the president.

In this context, the political debate has become superficial. It has more to do with beliefs than arguments. Two camps, uncompromising and unreceptive toward each other, stand face to face. They no longer talk or listen to one another. American society’s two parties have lost contact. Several polls carried out by an independent public opinion research organization, the Pew Research Center, back this up. Each camp has withdrawn into its bubble, proposing fundamentally different realities. As a result, there is a growing lack of confidence in the government and media. The “buzz” of social media has increasingly replaced the notion of verifiable information. Under these circumstances, how can one succeed in building a common policy based on the need for consensus, as is done in Switzerland?

Today, the political machine is broken. It courts controversy instead of making decisions. Lacking vision, Trump works by obsession: building the anti-immigrant wall, weakening the United States’ economic competitors, neutralizing some of the so-called rogue states, silencing the voices of enemies within. In Congress, Democrats tear themselves apart over the need to initiate impeachment proceedings − a debate that absorbs them to the point of neglecting the pursuit of the commitments for which they were elected.

The United States has lost what it stands for. And now Americans don’t recognize themselves or each other in their own country. Trump is not solely to blame. But his contempt for facts, his unpredictability, his deep-seated aggressiveness, his lack of restraint in communication, as well as his egocentric absolutism have created a perfect storm. The Trumpian typhoon sucks in everything, leaving nothing untouched.