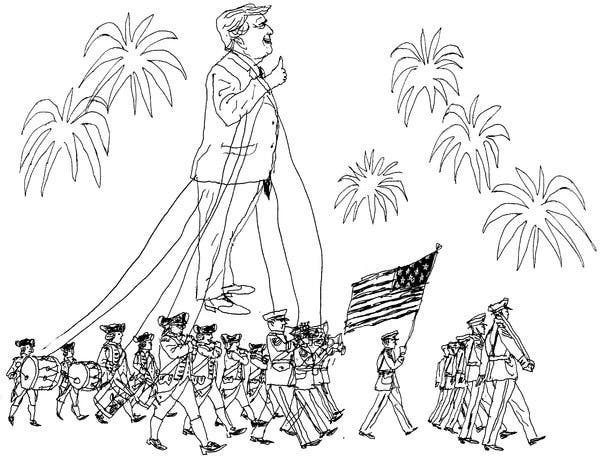 It all started on July 14, 2017. That day, Donald Trump was in Paris, invited by French President Emmanuel Macron. And the two, together, attended the Bastille Day parade.

The military deployment of the country that contributed to humanity the terms “Freedom, Equality and Fraternity,” and “Chauvinism” impressed the American president. So much that he himself said that the proto-Napoleon demonstration of the French “is one of the greatest parades I’ve ever seen.” [https://www.nbcnews.com/politics/donald-trump/how-will-trump-s-display-measure-look-huge-military-parades-n1026001] So, as soon as he arrived in Washington, “one of the first calls I made was to say you have to start seeing how we do this. So we’re thinking about the Fourth of July, on Pennsylvania Avenue.”

Three years later, the friendship between Macron and Trump has evaporated, as the Elysee Palace has portrayed the daughter of the U.S. president, Ivanka Trump, badly, with the publication on Instagram of a video of her in which she is seen talking to five world leaders − Theresa May, Christine Lagarde, Angela Merkel, Justin Trudeau and Macron himself − who literally do not know where to go when the president’s adviser and former shoe designer opens her mouth. But the parade has moved on.

So today the U.S. president will give a speech at the Lincoln Memorial, in that city, along with several tanks and armored vehicles brought by train and truck from the base of Fort Stewart, Georgia. The Washington sky will be crossed by F-22 fighters and fighter-bombers F-35 and F-18, and even by one of the Air Force Ones, the jumbo jets that the head of the U.S. government uses for travel (and that, according to the news agency Bloomberg, makes him, after Japanese President Shinzo Abe, the president that emits the second-highest level of gases that cause global warming). The military traffic will force Reagan National Airport, next to Washington, to close for several hours.

But there will be no parade of ground forces, mainly because the 60-ton M-1 Abrams tanks would break the streets of the U.S. capital, which, unlike those in Paris, are not used to this type of event.

In fact, the United States is a country where there is no tradition of military parades. So Trump’s idea has caused tremendous controversy. We must bear in mind that, traditionally, the president’s agenda on the Fourth of July is private or semi-private. And today Trump is going to speak to 5,000 people in the Mall, in an event called “Salute to America.”

All this is totally unusual in the United States. The last time there was a military parade in Washington was in 1991, to celebrate the end of the Gulf War, in which the U.S., leading a coalition of more than 20 countries − including Spain − expelled Iraq from Kuwait. And to find a message from the president to the nation, we have to go even further: to 1951, when, in the middle of the Korean War, Harry Truman spoke to the country. In the USA, the national day is for barbecues, to see the fireworks, and, unfortunately, to commit murders. But not for parades.

And, in addition, there is the danger of crime. The neo-Nazi group Proud Boys, which has already manifested itself at the Trump rally in Orlando two weeks ago, will be at the Mall. Code Pink − the organization that occupied the Venezuelan embassy in Washington to prevent the government of Juan Guaidó from assuming control of diplomatic representation − will also be present, with the same inflatable “baby Trump” used recently in London and in Orlando by the enemies of the president.

Meanwhile, nobody knows the cost of the celebration, but this could range between $2.5 and $11 million of public money, without counting the cost of moving military units or the fuel for the planes.

Those who seem to have liked the idea least are the military itself, especially after the scandal unleashed by the White House to move the destroyer John McCain out of the president’s field of vision during Trump’s visit to the port of Yokosuka, in Japan, where the ship has its base. Thus, Trump did not even have to read in the hull of a ship the name of his political enemy and hero of Vietnam.

Although the high-ranking officers of the armed forces, with their usual discipline, have complied without questioning the orders and will be with Trump on the day, retired generals have spoken out against the event. These events “are a favorite tactic of those who want to wrap themselves in the symbols of who we are rather than really celebrating who we are,” said retired Gen. Jason Dempsey. Lt. Gen. David Barno, former commander-in-chief of the forces in Afghanistan under George W. Bush, has gone further, saying that the parade looks “much more like an event of the Republican Party − a political event about the president − than a national celebration of the Fourth of July.” [https://www.politico.com/story/2019/07/02/trumps-militarized-july-4-1567767]

And think of a more surreal scenario: What happens if nobody goes? Trump, the president who created an absurd polemic with his insistence that more people had gone to his inauguration than Barack Obama, could find a parade without people. Or with few people. If that is the case, tomorrow morning we will have to be more attentive than usual to Twitter.