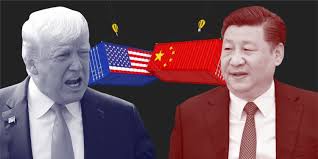 Since the U.S. began clashing with China over economic and trade policies, the Chinese people have found strength in unity and self-confidence. They believe that managing their own situation well will be more than enough to let them realize their goals. Yet in online forums, there are still rumors that the trade war will bring about an inevitable loss for China; that the only way for China to survive is to surrender to the U.S.

Is the trade war really bringing about an inevitable loss for China? History is the best teacher. Since the establishment of New China, China has made great sacrifices for the sake of its ideals. Facing the flames of war on the shores of the Yalu River in 1949, in order to secure its surroundings, China fought hard and won partial peace for a few decades. This victory proved that the time in which Western invaders could seize eastern coastlines with only a few cannons was gone, never to return.

This year, in the face of nuclear blackmail from the U.S., China has not flinched and does not believe that survival depends on surrender. Instead, China relies on its 5,000-year history, leans on its own national strength, and has successfully built an atomic bomb, hydrogen bomb and artificial satellites as long-term safeguards of national security. Let’s take another look at the facts: In the case of the trade war, some Americans think the United States’ implementation of restrictive trade policies will lead to overwhelmingly positive results. But the reality is just the opposite. The United States’ hopes of a rapid victory in this trade war have already been destroyed, and the probability of the trade war lasting a long time has increased remarkably. The sound of wide-ranging international criticism of the U.S. echoes around the world.

Is the trade war really bringing about an inevitable loss for China? Let’s examine where China should have confidence in the clash with the U.S. The unavoidable truth is that the U.S. started and escalated the economic clash. The conflict has created noticeable short-term economic fluctuations in China, and the income of domestic production managers and some salespeople has been negatively impacted. These difficulties have increased economic pressure at lower levels. However, if we move away from the short-term economic fluctuations and look at the situation as a whole, we see a different situation and a different outcome.

First, the effects of the economic friction between China and the U.S. are manageable. In 2018, Chinese exports made up approximately 18.2% of the gross domestic product, but the importance of exports for the Chinese economy is gradually decreasing. Beginning this year, China’s economy is reaching a steadily improving state, meeting reasonable intervals approaching the most important economic targets.

Second, the trend of economic growth in China is unchanging. Even after the start of the trade war, the long-term trend of improvement in China’s economic development has not changed. The continued growth that supports the foundation and good conditions of the economy have not changed; the revisions to the economic structure have optimized the economic situation.

Third, China’s comprehensive superiority is clear. China has a population of 1.4 billion, a labor force of 900 million, some 170 million people that have received a higher education, and the world’s largest middle class, including more than 100 million market actors. China is the world’s No. 1 manufacturer, has an independent industrial and economic system, and is the only country in the world that meets all industrial classifications offered by the U.N. At present, China is able to withstand the risks of foreign influence because its model of consumer demand guides economic development. In 2018, the contribution rate of China’s domestic consumption to economic growth reached 108.6%. Of that, 76.2% was due to the contributions of consumer demand. Consumer demand has become the engine of economic improvement. In 2018, China was ranked second in the world for investments in research and development, and the innovation capabilities of China’s science and technology sector are increasing incessantly.

Fifth, under the firm leadership of the Chinese Communist Party, the entire nation stands united as one. The clearly superior centralized power has been able to tackle important political matters even after the economic friction arose. The CCP can definitely respond to the challenge posed by the U.S., and see it as a path to opportunity.

China is already the world’s second largest economy, the biggest manufacturer, the biggest in material trade, the biggest country in the foreign-exchange reserves, and has substantially enhanced its national strength. These are all seen as huge development successes and are recognized worldwide. Should China express fear of America, bowing to those causing panic, or is it naive to ignore the power shift that has occurred between China and the U.S. over the last 100 years? It is naive to genuinely trust the false narrative that the U.S. is invincible, and sincerely believe China is fundamentally unable to respond to the U.S. trade war. Those spreading panic underestimate and misjudge China’s economic tenacity and political capabilities, and especially underestimate China’s determination to use its abilities to guard itself against what goes against its rights and interests.

In reality, the U.S. is not as untouchable as it imagines, and China is not as weak as the U.S. imagines. The Financial Times chief economics commentator Martin Wolf pointed out in an article that in the near future, the U.S.’s attempt to prevent China’s economic and technological rise is doomed to fail.

The negative influence of U.S. unilateralism, protectionism and bullying in the domestic and international arenas is becoming increasingly large. This influence is gradually becoming the strongest motivator behind diminishing the force of U.S. politics, and will eventually lead the U.S. to total isolation from the international community.

Every day, China continues to develop and grow in strength; it is not a lamb to be trampled on. Though some people in the U.S. attempt to take measures that bully China in order to suppress it and force China to submit to the United States, these are doomed and will be futile. They will do nothing but damage the interests of all parties, including the U.S.

China is not stirring up trouble, but it is also not afraid. Through the ages, Chinese people have not been afraid of empty threats, and have had the courage to dare to struggle and dare to win. While the U.S. government adopts a strategy of containment and suppression toward China, the Chinese nation has long since started down the path toward a great revival.