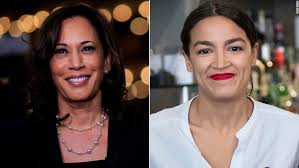 Donald Trump wants to become president for a second time; however, some women who stand for a new America will make the campaign difficult for him.

Donald Trump dominated the headlines because he is the first U.S. president to set foot on North Korean soil. If he really manages to get Kim Jong Un to visit him in the White House, he could be assured a place in the history books. Even more so if he becomes president a second time.

The latter may prove increasingly difficult, and that is not due to Bernie Sanders or Joe Biden, who were considered the most threatening opponents in the upcoming campaign thanks to their status as star politicians. The TV debate among Democrats, which had to be divided into two nights given the large number of candidates, turned into an admission of failure which will give Biden bad dreams for a long time.

Kamala Harris, the senator from California and former state attorney general, didn’t only grill the former U.S. vice president concerning how he downplayed his prior collaboration with racist colleagues in the Senate, while he apparently believed that he only needed to look as presidential as possible, she was by far the most competent – and if nothing else, the most authentic.

Harris stands for a new America and for a political generation aware that an official position does not make a politician and that the U.S. needs one thing above all: a vision of (social) justice. In that, she resembles Alexandria Ocasio-Cortez, who in turn just invited U.S. women’s soccer team captain Megan Rapinoe to the House of Representatives. Rapinoe’s sensational scoring in the Women’s World Cup is triggering new national pride among Americans, and yet she quite definitively told the television cameras that she would no way celebrate a possible title in the “fucking White House.”

Harris, Ocasio-Cortez und Rapinoe are the heroines of a new America. They have not only declared war on the age of Trump and Biden, but will sooner or later also win it. Even if the Donald Trump is reelected in 2020: Time’s up!