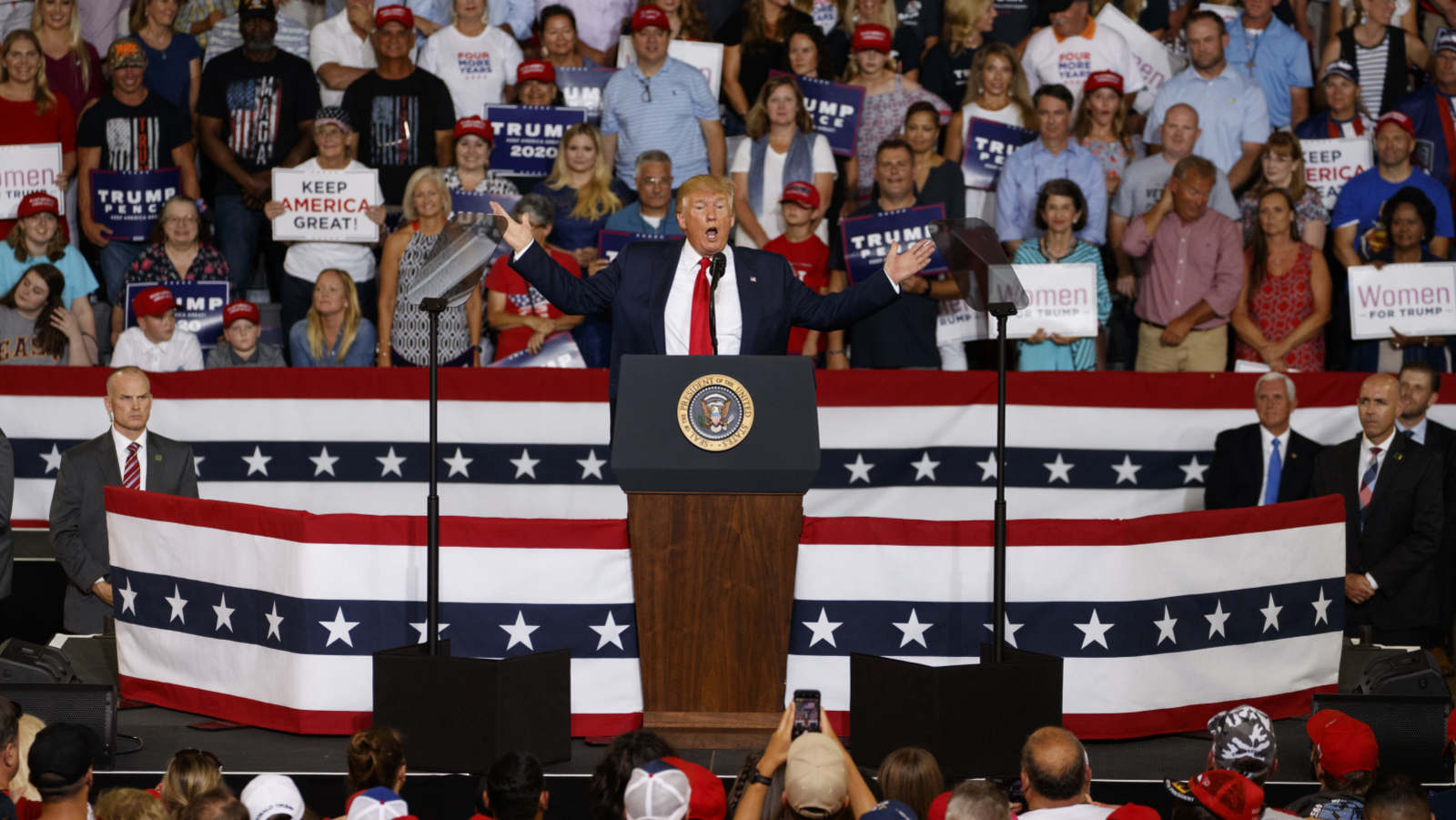 The Growth and Opportunity Project report, commissioned after Mitt Romney’s loss to Barack Obama in 2012, may have had a bland title. But its central conclusion was arresting: “Unless changes are made, it will be increasingly difficult for Republicans to win another presidential election in the near future.”

The report argued that the party faced electoral armageddon because of the growing number of non-white Americans.

In order to compete with Democrats, the report concluded that Republicans urgently needed to increase their appeal to racial minorities, especially Hispanic voters.

The report reflected the conventional wisdom of the time that America’s racial diversity promised to usher in a new period of Democratic Party dominance. This thesis was famously outlined in The Emerging Democratic Majority, a 2002 book by two leading political scientists.

Bush’s candidacy, of course, turned out to be a flop. Instead, Trump, who launched his campaign by describing Mexican immigrants as “criminals and rapists” and who pledged to build a wall on the southern border, won the party’s nomination and then the presidency.

The consequence of Trump’s triumph over political orthodoxy was on stark display this week when he triggered the most racially-charged and heated debate the US has seen since the deadly 2017 white supremacist rally in Charlottesville, Virginia.

It also offered a preview of how he plans to harness the grievances of white Americans to win re-election in 2020.

A DIFFICULT and CONTENTIOUS WEEK:

It is hard for Trump to shock people nowadays, but he did that on Sunday when he sent a tweet attacking four non-white Democratic congresswomen in strikingly inflammatory terms.

“Why don’t they go back and help fix the broken and crime-infested places from which they came,” he said. “Then come back and show us how it is done.”

Trump’s outburst was aimed at the four members of a group of left-wing congresswomen known as “the squad”: Alexandria Ocasio-Cortez, Ilhan Omar, Rashida Tlaib and Ayanna Pressley. All of them besides Omar – whose family migrated to the US from Somalia when she was nine – were born in the US.

The tweets generated an outcry from world leaders including Theresa May and Jacinda Ardern. Media outlets including CNN and The Washington Post broke with convention to explicitly label the comments “racist” in their news reports.

In the days following Trump’s tweets, White House counsellor Kellyanne Conway stunned observers by asking a Jewish journalist at a press conference to specify his ethnicity. The Democrat-controlled House of Representatives passed a resolution criticizing Trump’s “racist comments”. A Republican congressman declared he too was a “person of colour” because he was white. At a Trump rally in North Carolina on Wednesday night, supporters chanted “send her back” when Trump mentioned Omar’s name.

On Thursday the House chaplain, Jesuit priest Patrick Conroy, said it had been a “difficult and contentious week in which darker spirits seem to have been at play in the people’s house”.

A USA Today poll found that 65 per cent of respondents believed Trump’s tweets were racist and 59 per cent thought they were un-American.

But while the episode underlined Trump’s ability to polarise Americans, it also revealed his almost total dominance of the modern Republican Party.

Most of the Trump critics in the party have either left voluntarily or been forced out of Congress. Just four House Republicans sided with Democrats on their resolution condemning Trump’s remarks as racist. And an Ipsos/Reuters poll showed Trump’s net approval among Republicans rising to 72 per cent after the comments, a five-percentage-point increase on the previous week.

The fact that Trump received a poll bounce among Republicans did not surprise Ashley Jardina, a political science professor from Duke University and the author of White Identity Politics.

She says Trump’s tweet “was an especially effective and strategic remark” because it solidified his relationship with two crucial elements of his voting base.

“The first subset is white voters who are racially resentful, who have hostility to voters of colour, they don’t believe they play by the rules,” she says. “Telling women of colour in Congress to go back to the countries they come from is going to resonate with racially prejudiced voters.”

It will also play well, she says, with a different subset: voters who are worried about the changing demographics of America but don’t harbour the same hostility towards racial minorities.

“For these voters, the idea elected officials don’t uniformly look like them is symbolic of the loss of political power that white Americans have enjoyed for a long time.”

Jardina says the masterstroke of Trump’s 2016 campaign was his realisation that, in an increasingly diverse America, Republicans didn’t have to reach out to minorities to win elections. They could also triumph by “exploiting the politics of both white racial resentment and white racial identity”.

“For a long time white Americans have held disproportionate cultural, political, economic and social power,” she says. “Now many whites feel that their group is no longer securely on top and they feel threatened.”

The Sydney Morning Herald and The Age saw this dynamic at play during a trip last year to Dubuque – a mostly white, economically prosperous county in Iowa that swung from Obama in 2012 to Trump in 2016.

“This country is changing way too fast,” said Dave Grothe, a white 69-year-old former electrician and army veteran, while eating breakfast at a family dinner.

Grothe voted Democrat most of his life, including for Obama in 2008, but felt the party had abandoned people like him.

“This country is becoming Mexico North. The Democrats want Hispanics here for their votes.”

Jardina’s research has found that many white Americans, especially those without a university degree, are placing increased importance on their racial identity. These voters are more politically activated by social and cultural issues, she says than concerns about the economy.

The backlash against black footballers kneeling during the national anthem was a classic example of the issues that engage these voters. So was the recent debate about Disney’s decision to cast a black actress as Ariel in a new version of The Little Mermaid. It spawned the Twitter hashtag #NotmyAriel.

The response to the casting decision was strikingly partisan in nature. A poll released this week showed that 75 per cent of Democrats supported Disney’s decision, compared to just 44 per cent of Republicans.

Despite the increasingly multicultural nature of the US, Jardina says the style of white identity politics practised by Trump is likely to prove successful in the short term. The number of Hispanic Americans may be growing but they turn out to vote far below their share of the electorate.

“As long as that continues,” she says, “Republicans have a winning strategy.”

WHAT ABOUT THE INDEPENDENTS?

Michael Steele, a former chairman of the Republican Party, takes a different view on Trump’s tweet, saying: “It did not make strategic sense.” Steele believes this is exactly the type of outlandish behaviour that is suppressing the President’s support among independent voters who might otherwise vote for him.

“People in the party are not happy about it – they want him to be talking about the sound economy, job growth, the situation at the border,” Steele says. “Instead we have had a week-long discussion about whether the President is racist.”

Steele says it makes sense for Trump to target “the squad”, but mostly because of many of their policy ideas – like abolishing the Immigration and Customs Enforcement Agency (ICE), eliminating private health insurance and decarbonising the US economy in 10 years – sit far outside the political mainstream.

But he thinks Trump went overboard by emphasising their ethnicity rather than their policies.

Nevertheless, Steele says: “The President is in with a very strong chance to be re-elected. Who is going to beat him right now? That candidate hasn’t emerged.”

A moderate Democrat like Joe Biden, he says, would be ideally placed to beat Trump, but he expects the party’s primary voters will support a younger, more left-wing candidate.

That could cost the party votes in crucial 2020 states like Pennsylvania, Wisconsin and Iowa, where white, working-class voters still dominate.

“White voters still have electoral power,” Steele says. “And Trump is in command of that vote.”