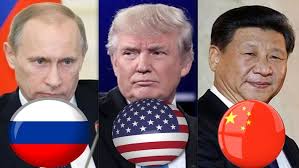 Alexander Gabuev on how the truce between the U.S. and China will affect Russian exports.

“I had a great meeting with President Xi of China yesterday, far better than expected. I agreed not to increase the already existing Tariffs that we charge China while we continue to negotiate. China has agreed that, during the negotiation, they will begin purchasing large amounts of agricultural product from our great Farmers,” President Donald Trump tweeted after negotiations in Osaka.

The conditions of the truce between the U.S. and China are worrying for Russian exporters of agricultural products. China has been the largest importer of Russian foodstuffs for the last two years. In 2018 alone, Russia’s exports to China increased by 42%, up to $2.5 billion. This is not surprising, considering the high growth rates of China’s middle class and its transition from a carbohydrate diet, typical of farmers, to one full of protein, which is normally representative of an urban lifestyle. At the same time, the Russian government has started actively helping its agricultural sector to circumvent protectionist policies supported by the Chinese food industry. It was no accident that out of 25 commercial documents signed during the Chinese representative’s visit to Russia, six deal with phytosanitary import requirements for Russian food products exported to China. The trade war between the U.S. and China has become a major stimulus for Russia’s food industry since Beijing’s restrictions on U.S. imports have become its main tool.

So now, President Trump seeks support from agricultural states in the upcoming elections, and because of that, he is willing to compromise in negotiations with Beijing. In the near future, U.S. soy, wheat, meat and other products will return to the Chinese market and will make the competition more intense.

Russian agricultural exporters are already struggling on the Chinese market. First of all, there are serious logistical issues. There are no equipped bridge crossings along the Russian Far East border, and there are customs red tape and traffic jams along the Trans-Siberian Highway, which delay the transportation of food and therefore bring it closer to its expiration date. As a result, when food products finally reach their destination in China, grocery stores refuse to sell them.

The second problem is weak marketing. Russia does not seem interested in promoting its products in China or actively using online platforms, such as WeChat, for example. One-time fairs organized by the Russian Export Center do not produce long-term results.

Finally, export requires legal protection from counterfeits products, however, some producers realize that only after their products are already copied on the Chinese market.

So for successful competition with American farmers in the Chinese market, the Russian exporters of agricultural products will need to address their own policies first.

About Iana Shchetinskaia 28 Articles
Iana Shchetinskaia studies History with a focus on U.S.-Russian relations. She teaches at a university and a language school in Moscow, Russia. She holds a Master of International Studies degree from North Carolina State University where she studied on a Fulbright scholarship. She is passionate about promoting mutual understanding among countries and communities and considers it a privilege to be a part of WatchingAmerica.