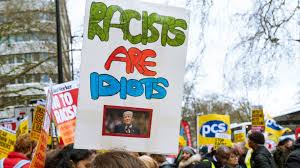 Filmmaker John Waters loves to share his pride in his home town of Baltimore. “You can look far and wide, but you’ll never discover a stranger city with such extreme style. It’s as if every eccentric in the South decided to move north, ran out of gas in Baltimore, and decided to stay.”

Since Saturday, Baltimore, the city in which the eccentric director of “Polyester” was born, has been making headlines after President Donald Trump tweeted for the umpteenth time. The president hasn’t taken any vacation from social media for the summer. Far from it. Trump put this Maryland city on the map after referring to it as “a disgusting, rat and rodent infested mess.”

Trump’s missive was directed at Elijah Cummings, a Democratic congressman who represents West Baltimore. As a result, a stormy debate pitting critics and defenders of the city, where two-thirds of the population is African American, against one another has since dominated the news in the U.S. All in a country where the black community has historically been confined to low-income neighborhoods where white people never set foot.

Trump’s reductive and condescending view of urban squalor, crime and poverty has, among other things, provoked the outrage of Dan Rather, a veteran journalist and former broadcaster for CBS and “60 Minutes,” who tweeted, “American greatness was built by women and men who worked, lived, and even sometimes struggled in places like Baltimore. We don’t need any racist lectures from people who hide their tax returns in places like Mar-a-Lago.”

Trump’s attack on Baltimore hasn’t just started a fire, but added fuel to the nation’s racist and segregationist flames. That is because, even 150 years after the 13th Amendment abolished slavery, race remains a very thorny issue.

Racism on the Rise Since Trump

Race relations have grown increasingly tense in the United States. A survey conducted by the Pew Research Center last April found that more than 50% of Americans believe that racism is on the rise in the United States since Trump was elected. Six out of 10 Americans maintain that race relations are generally bad. (This number climbs to 71% among black respondents.) Some 65% of respondents agree that it has become more “common” to express racist views since Trump was elected, while 45% say it has even become more “acceptable” since his victory nearly three years ago.

What is the Republican president doing to ease these tensions? He dwells on race. He demonizes four minority Democratic congresswomen, telling them to “go back […] [to the] places from which they came” if they don’t love America. He targets Rep. Cummings, and then the Rev. Al Sharpton, an African American. (Yesterday, Trump called him “a con man” who “[h]ates Whites & Cops.”)

Of course, Trump claims that he isn’t racist and accuses his critics of being racist themselves. This is a childish reflex that would be pathetic if it wasn’t coming from a 73-year-old leader.

Trump’s many recent comments are likely a preview of what we can expect from his 2020 presidential reelection campaign. They confirm the old saying that people must be divided to be conquered.

And it’s a politically deft move to steal votes by playing the race and patriotism cards. It appears to be working. According to a recent poll, 44% of Americans approve of the job Trump is doing, which is very high for an end-of-term president.

In his poem “Harlem,” writer Langston Hughes compares “a dream deferred” to a “raisin in the sun.” The pyromaniac-in-chief is currently doing the same to the American dream. From this point forward, the idea that equal opportunity, justice, and human dignity apply to all residents of this country is as dried up as fruit in the sun.

Imagine how it will be after Trump’s second term.