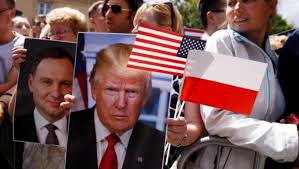 Minister Krzysztof Szczerski has announced that President Donald Trump will take part in the Polish national celebration of the 80th anniversary of the outbreak of World War II, which will not take place at Westerplatte as celebrations traditionally do, but rather in Warsaw. Is there anything to be happy about with that visit?

The details of the visit are not yet known. There was no information about it on the official White House website as of this afternoon. Szczerski claims that details may still appear today, but the only thing we know is that the visit will take place from Aug. 31 to Sept. 2.

This is Trump’s second visit to Poland under the Law and Justice party government. The president of the United States has been shocking us daily since 2017. The most recent incident involved his attack on four Democratic congresswomen who oppose him, an attack that has been perceived as racist. Trump’s statement calling on the congresswomen to return to the countries where they came from, even though three of them were born in the United States and the fourth immigrated to the United States as a child, shocked America. No U.S. president had used such a tactic in a political campaign for more than half a century.

Trump will arrive in Poland more than a year before the next presidential election. In Poland, parliamentary elections are quickly approaching, and presidential elections will take place next year as well. Both Trump and the currently ruling camp in Poland will probably not waste the opportunity for a propaganda campaign to consolidate their voter base.

I remember a visit to Poland by President Jimmy Carter while the Polish United Workers Party was in power in 1977. The illegal opposition at the time looked forward to it with hope, both the opposition connected with the Movement for the Defense of Human and Citizen Rights and the opposition connected with the Committee for the Defense of Workers. Opponents hoped that Carter, following the advice of his close and influential adviser, Zbigniew Brzezinski, would speak out critically about human rights violations in the People’s Republic of Poland.

Trump’s second visit to Poland in two years will probably confirm the impression in Europe that Poland, under the rule of the “united right,” is in sync with the United States under the anti-EU Trump, but is distancing itself from the values of the European West. This is something only President Vladimir Putin’s team can be happy about.