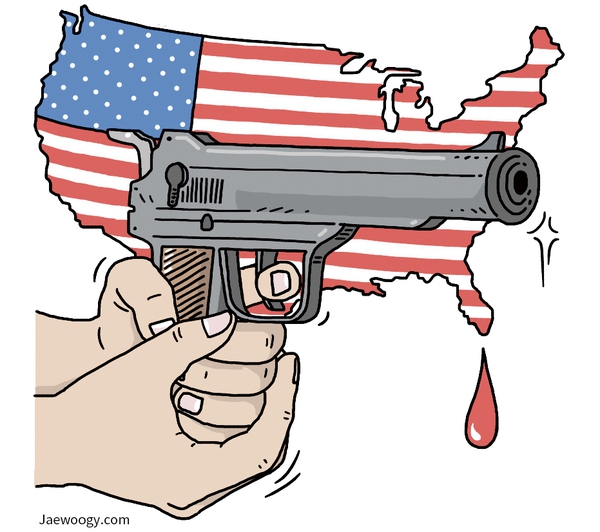 Last week, Amnesty International issued a travel advisory that “calls on people worldwide to exercise caution and have an emergency contingency plan when traveling throughout the USA.” This is because of “high levels of gun violence throughout the country [the United States].”

Amnesty International even released detailed instructions, advising tourists to “Be extra vigilant at all times and be wary of the ubiquity of firearms among the population. Avoid places where large numbers of people gather, especially cultural events, places of worship, schools, and shopping malls. Exercise increased caution when visiting local bars, nightclubs, and casinos.”

It is extremely rare for an international human rights organization to urge people to exercise caution when traveling to a developed nation because of social issues, or any issue besides war or a natural disaster. Ernest Coverson, the manager of the End Gun Violence Campaign at Amnesty International in the United States, said that “the country does not adequately protect people’s right to be safe, regardless of who they might be. People in the United States cannot reasonably expect to be free from harm — a guarantee of not being shot is impossible.”

There are currently 35 countries in the world that allow gun ownership. Of these, the only countries in which the right of civilians to own guns is written into the constitution are the United States, Mexico and Guatemala. The scale of distribution of civilian guns is beyond imagination. The most recent report of the private research firm Small Arms Survey, headquartered in Switzerland, reveals that as of 2018, there are more than 1 billion small arms (personal firearms) distributed worldwide. Of these, 857 million belong to civilians not in the military or paramilitary forces.

If we focus only on America, that reality becomes even more shocking. Americans alone own 393 million guns, more than half of all of the privately owned guns in the world. With 120 guns for every 100 people, 4% of the world’s population owns 46% of its guns. This number is three times that of the number of guns in the standing armies of Russia (30.3 million), China (27.5 million), North Korea (8.4 million), Ukraine (6.6 million), the United States (4.5 million) and India (3.9 million) combined. It almost would not come as a surprise if shootings occurred every single day. The U.S. Gun Violence Archive classifies shootings that have more than four victims as mass shootings. In the last week alone, shootings in El Paso, Texas, and Dayton, Ohio killed 30 people, putting the number of mass shootings in the United States this year at 253.

Gun regulation in the United States, a goal for 200 years since the country was founded, is, in reality, just a wild hope. This is because the right to bear arms is a golden tradition, dating back to 1791, when the right was signed into law as the Second Amendment, 15 years after the Declaration of Independence, and even earlier, in response to the need for self-defense on the frontier.* One of America’s most important lobbies, the National Rifle Association, is this golden tradition’s most loyal servant.

The right to own a gun under the pretense of self-defense, or the right not to be shot dead: The question of which of these is the more basic and predominant right is not one that needs to be asked. Last week, The Nation released an article titled, “It’s Time to Repeal — and Replace — the Second Amendment.” It argues that “the meaning of the amendment has been so badly mangled that our only choice is to start over with something that allows for real gun control.”

The sacrifices needed to teach this lesson have already been made many times over.