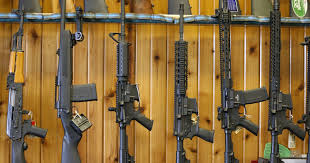 The news is repetitive, but should not be ignored because of that. Shootings in the United States are causing terror and leaving dozens of victims, and the authorities are seemingly unable to stop them.

Last weekend, there were three of these terrible events in which a shooter drew his weapon and fired mercilessly at unarmed and unsuspecting people. They took place in cities like Chicago, small towns in the state of Ohio, Gilroy, California and border towns like El Paso, Texas.

A total of 251 shootings in 2019 — more than one per day — provides an idea of what is happening in the United States. In every case, there is talk of perpetrators with mental disorders who arm themselves and slaughter people who, in many cases, they do not know. It is a terror that relies on the freedom to buy weapons, guaranteed by the Second Amendment to the United States Constitution, a freedom which then ends the lives of human beings.*

For decades, such behavior has caused anxiety and destroyed thousands of homes, families and communities that watch helplessly as their neighbors, parents and children are killed. Despite this situation and the undeniable relationship between weapons and crime, it has been impossible to establish limits that prevent access to powerful, sophisticated weapons used in war to anyone who meets the legal requirements, requirements that have been proven ineffective in preventing indiscriminate access to the weapons.

Now, the 20 murder victims and the 26 seriously injured men and women in El Paso represent another aspect of the issue: the racial hatred of someone who travels for 12 hours from Dallas to that city and shoots up a retail store where Mexicans travel from across the border to shop. The behavior of the alleged perpetrator is a hate crime against those who are not even immigrants.

The murderer considered his victims to be enemies who endangered his country, echoing the racist discourse that has taken over United States politics.** Although President Donald Trump condemned the events and downplayed the white supremacy that motivated the attacker, he called for party unity and more control over weapon sales to people with mental illness, and further took the opportunity to promote the immigration policy he touts as his reelection campaign slogan.

Without a doubt, that racism does not seem to be behind the shootings in Dayton, Ohio Chicago, Illinois or Gilroy, California. But the lethal combination is the same in the hundreds of massacres over the last 20 years in the United States: high-powered weapons available for purchase by anyone and used to destroy the lives of people in malls, theaters, universities, schools, parks and churches.

It seems incredible that a country that prides itself on national security as one of its main goals cannot act against the weapons that are used to kill thousands of Americans.

*Editor’s note: The Second Amendment provides “A well regulated Militia, being necessary to the security of a free State, the right of the people to keep and bear Arms, shall not be infringed.”

**Editor’s note: The person arrested for the shootings in El Paso has been charged, but not convicted of any crime as of Aug. 16, 2019.