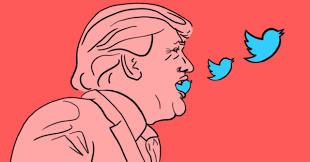 In response to the death of Jeffrey Epstein, the American president once again was ready with a wild conspiracy theory. As Camille Lopez explains, this nasty habit is not without consequences.

On Saturday, Donald Trump shared a conspiracy theory accusing the Clintons of assassinating Jeffrey Epstein. The president’s reaction came after the American financier was found hanged in his cell while he awaited trial for alleged sexual assault of minors.

No one was surprised. And that is the problem.

“Died of SUICIDE on 24/7 SUICIDE WATCH? Yeah, right! How does that happen? Jeffrey Epstein had information on Bill Clinton and now he’s dead,” the comedian Terrence Williams had tweeted earlier. The hashtags #ClintonBodyCount and #ClintonCrimeFamily rounded out his tweet. A few moments later, Trump’s Twitter account retweeted Williams’ comment.

That’s a lot to unpack. Whatever the context, these words coming from an American president, or any politician, warrant more than just a few raised eyebrows.

But here we are with this scaremongering, the latest in a long line of conspiracies put forward by Trump. We have become inured to the scale of tirades coming from the leader of the most powerful country in the world, so rather than react appropriately, we are more and more desensitized when faced with his dangerous, unfounded words. Put a frog in hot water and it will hop straight out, but if you heat the water slowly, it will boil to death.

Let’s take a look at some previous examples.

Remember that all the conspiracies listed below are baseless and have been refuted numerous times.

According to a 1998 blogpost on Snopes, the “Clinton Body Count” (or Clinton Body Bags) theory can be attributed to a lawyer named Linda Thompson who, in 1993, compiled a list of 34 people close to the Clintons who had died under suspicious circumstances. A number of different versions of this list, entitled “Clinton Body Count: Coincidence or the Kiss of Death?” still make the rounds. Meanwhile, Thompson has admitted that she has no direct evidence to support her accusations.

The theory, however, resurfaces from time to time, and in 2016, the murder of Seth Rich gave it a new lease on life. Now Epstein’s suicide has done the same.

Trump has catapulted the theory into the public consciousness like no other.

Then, there’s his obsession with Barack Obama’s birth certificate. Starting in 2011, the current president regularly questioned the former president’s nationality. While still a real estate magnate, Trump became the most recognizable face of the “birther” movement, a group of conspiracy theorists who were convinced that Obama was born in Kenya not Hawaii, and thus was an illegitimate president.

For nearly three years, Trump tweeted accusations to this effect until in 2016, when the 45th American president eventually admitted that Obama had indeed been born in the United States.

However, that same year, Trump claimed that he had suspicions about the death of Supreme Court Justice Antonin Scalia. The incident brought generated its own streak of conspiracy theories in which a number of both Democrats and Republicans were accused of ordering Scalia’s murder.

Also in 2016, while still on the campaign trail, the president falsely insinuated that the father of Ted Cruz, his opponent, had been involved in the assassination of John F. Kennedy. The National Enquirer, a tabloid, published the unsubstantiated story.

The following year, Trump falsely accused Obama of bugging Trump Towers, accusations which were refuted by the FBI and the National Security Agency.

Over the last three years, the president who lost the popular vote during his election has regularly stated to whomever would listen that in 2016, millions of Californian voters were able to cast their votes several times despite the fact that there is no proof that such electoral fraud took place.

It is dangerous to believe that a retweet from the American president is a trivial, unimportant thing. This will lead us to see that the situation is normal, despite the fact that Trump’s past is littered with unfounded accusations.

But in the world of conspiracy theories, radicalization takes place easily and quickly. In this world, each tweet from the president is thought to contain a hidden message or clue.

The world may not revolve around Twitter, and Twitter does not truly represent our society, but it must not be allowed to normalize the movements which develop there. Dangerous conspiracy theories, such as these, find a home on Twitter, and over time, new adherents.

In particular, we must be vigilant of those who promote these conspiracy theories. Especially when one of those doing the promoting has 63 million Twitter followers and is the president of the United States.