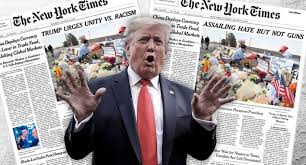 A stormy American week is ending, one which began the previous weekend with the tragic events in El Paso and Dayton. Two lone gunmen, at approximately 1 p.m., but independent of each other, murdered 31 people and wounded dozens. The El Paso shooter had posted his white man’s manifesto on the internet beforehand. Among other things, he wrote that his attack was a defense against the “Hispanic invasion of Texas.” Although he wrote that he had held his opinions before Donald Trump’s arrival in the White House, things don’t happen beyond time and space, in a social vacuum, or in media silence.

The leitmotif of Trump’s entry into American politics is an uncompromising, verbally brutal attack on immigrants arriving in the United States through the southern border with Mexico. The very word “invasion” is also one of Trump’s most frequently used expressions. At a rally with Florida voters a couple of weeks before the El Paso massacre, when the president complained that there was no way to stop immigrants, someone in the crowd shouted, “Shoot them.” People laughed, the president smiled.

According to information gathered by police thus far, the Dayton shooter was, by contrast, left leaning, a fan of the antifa movement.* Aha! So why don’t the media write about that, cry Trump supporters. It simply shows, they say, once again how unbelievably hypocritical judgment of the president is.

Very well. Then let’s take that logic to its conclusion: The El Paso shooter has 22 victims on his conscience, the Dayton shooter, nine; so by a simple calculation, we reach the conclusion that an adherent to the so-called far right is 2.4 times more dangerous than a so-called far-left sympathizer. Of course, that’s absurd and cynical, but no more so than the assertion that no one pays attention to the American president’s giant megaphone, that it doesn’t matter.

As one example of the flood of commentaries which appeared in U.S. media in connection with the previous tragic weekend, there is that of conservative author Ross Douthat of The New York Times. He’s no “anti-Trumpist.” More than any other regular Times commentator, he listens to the general points that Trump tries to propagate. Douthat opines, for instance, that Trump’s ideas are “a more populist and worker-friendly conservative economics, the idea of a foreign policy with a more realpolitik and anti-interventionist spirit, the idea that decelerating low-skilled immigration would benefit the common good, the idea that our meritocratic, faux-cosmopolitan elite has badly misgoverned the republic.”

But Trump’s personality and the means he employs are another matter. On this, Douthat writes, “Trump is deeply connected to what happened last weekend, deeply connected to both massacres. Not because his immigration rhetoric drove the El Paso shooter to mass murder in some direct and simple way; life and radicalism and violence are all more complicated than that. But because Trump participates in the general cultural miasma that generates mass shooters, and having a participant as president makes the problem worse.”

“But the connection between the president and the young men with guns,” according to Douthat, goes beyond Trump’s “rhetoric or ideology that he deploys, but the obvious moral vacuum, the profound spiritual black hole, that lies beneath his persona and career.”

No, Trump does not have blood on his hands, but to put it in language a child could understand, as Trump himself likes to say: The social atmosphere in the United States stinks from the head down.

And in relation to immigration and coexistence within American society, the characterization of one American commentator during Trump’s 2016 presidential campaign still holds true: “Trump may not be a racist, but he won’t mind at all if racists vote for him.”**

Which is such a fine distinction, of course, that many on the other side cannot or will not see the difference; and in their straightforward designation of Trump as openly racist, they also oppose all those who don’t share their unequivocal view.

We True Democrats Are Canceling Our Subscriptions

The president’s televised speech on the tragic shooting sounded tone-deaf, especially coming from his mouth. But he said what he said. “In one voice, our nation must condemn racism, bigotry, and white supremacy. These sinister ideologies must be defeated,” and American society should unite, according to Trump.

The New York Times devoted two front-page articles to the speech and its broader context. The main article, which cited the president’s speech directly, bore the headline: “Trump Urges Unity Vs. Racism.”

The wording was not ideal. It paraphrased Trump, rather than conveying the speech’s context – which was, nonetheless, very thoroughly described in the text of the news article.

But the viral storm, which broke out on social media, after the Times ran its Tuesday front page on Twitter Monday night, aptly illustrates how the extreme part of one party, Trump, can drive the other party to extremes.

The newspaper was immediately excoriated by Democratic presidential candidates, and Democratic Rep. Alexandria Ocasio-Cortez hastily condemned the newspaper. In the opinion of this flag-bearer of the party’s progressive left, the front page of The New York Times served as “a reminder of how white supremacy is aided by – and often relies upon – the cowardice of mainstream institutions.”

But the paper was condemned not only by active politicians, who always like to add fuel to their own agenda and media visibility. Journalists and people inside the Democratic Party also went on the attack, saying the Times had shown journalistic cowardice by consciously sidestepping the issue in Trump’s favor. A call to cancel subscriptions appeared on Twitter, and Adam Jentleson, former deputy chief of staff for Democratic Senate Majority Leader Harry Reid, boasted of having done just that: “I’m cancelling my NYT subscription today. Great reporters but terrible editorial judgment on headlines and social media, which is all most people read … Headlines matter more than ever – that’s the reality of the industry. Refusing to take that seriously is a sign of a failing institution that is not up to the challenge. I’ll spend my money on other outlets.”

Let’s leave aside Jentleson’s media “analysis,” which depends completely on headlines. If that’s how he thinks, then, understandably, the excellent, heavily contextualized content of the reporting would not have placated him. But it’s truly amazing when radical Democrats kick around the best helper their party could have in its ambitions to gain the White House.

The New York Times’ basic inclination is liberal-Democratic, and, at the same time, it’s a professional national daily, followed and respected by a majority of Democratic voters. It’s a central source of information, which many others constantly use to orient themselves. If Jentleson and others are dissatisfied with the fact that the paper’s basic ideological orientation does not matches theirs – and demand blind partisan loyalty – then there’s nothing left for them to do but wail on Facebook and chirp resentfully on Twitter. That will make them a much more ready target for Trump.

”’Congratulations on Your Decision,’ – D.T.”

The New York Times changed the headline roughly an hour after things went viral, and the second edition of Tuesday’s print version read,“Assailing Hate But Not Guns.”

Even so, critics were not satisfied, because if Dan Pfeiffer, former adviser to Barack Obama, who was cited on the Politico, is right, the matter is much more serious. In Pfeiffer’s view, apparently, left-leaning candidates for president could use criticism of the media to increase voter support. “For the first time in my career, making the press a foil is good politics in a Democratic primary, and that is going to have long-standing consequences for the business of journalism,” Pfeiffer said.

Perhaps. First and foremost, it could have consequences for the Democrats’ chances at the White House, very unpropitious consequences. Embittered radicals would do well to take to heed the warning of The Atlantic Monthly’s editor-in-chief, Jeffrey Goldberg, on Twitter: “The New York Times employs 1,600 journalists who do indispensable work across the globe. The paper publishes millions and millions of words each year. Sometimes it makes mistakes. Also, President Trump would like you to cancel your subscriptions.”

*Editor’s note: Antifa is shorthand for anti-Fascists, an umbrella description for the far-left-leaning militant groups that resist neo-Nazis and white supremacists at demonstrations and other events.

**Translator’s note: Although accurately translated, this quoted remark and its source could not be independently verified.