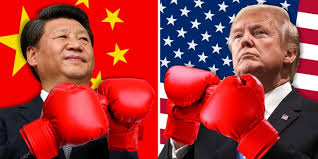 According to Lu Shaye, China’s ambassador to France, the United States broke its promises by imposing new tariffs on his country. He is asking for dialogue, but warns that China will not participate in dialogue at any cost.

At the end of June during a meeting in Osaka, the Chinese and American heads of state agreed to restart trade negotiations in a spirit of equality and mutual respect. The United States promised at that time that it would not impose any new tariffs on Chinese imports.

One month later, the United States announced its decision, effective Sept. 1, 2019, to impose an additional 10% tariff on a total of about $300 billion in Chinese goods. Moreover, with little regard for the truth, the United States accused China of currency manipulation, thus heightening tensions in the Chinese-American trade wars.

The most laughable part is that, once again twisting reality and ignoring the facts, the United States accused China of not having kept its promises to buy American agricultural products and of failing to halt fentanyl exports to the U.S. However, since the meeting in Osaka, China has, in fact, imported 2.3 million tons of American soybeans, and, since May 1, China has implemented a stricter policy toward fentanyl than the United States.

The International Monetary Fund’s latest report clearly indicates that the surplus in China’s budget in 2018 is only 0.4% of its gross domestic product, well over the 3% threshold that fits the American definition of a “currency manipulator.” So, where does this accusation of “currency manipulation” come from?

Unlike American fickleness, China’s position in trade negotiations has never changed. Our greatest wish is to come to an agreement with the United States with mutual respect and on equal footing. Nonetheless, it is out of the question for us to put up with extreme pressure, threats and blackmail, just as it is unthinkable for us to sacrifice our fundamental interests and legitimate right to development merely for the sake of coming to an agreement. If the United States wishes to have a dialogue, our door is wide open. If it is looking for a fight, we will fight until the end.

What is needed now is for the United States to prove to China and the rest of the world that it is, on the one hand, sincere, and on the other hand, a trustworthy negotiator.

There is no use in denying it: this war has made our economic difficulties worse. Nevertheless, foreigners have largely underestimated our resilience. As such, our year-over-year growth rate was 6.3% for the first half of 2019. In July, our exports had their best performance in three months, and our purchasing managers’ index saw its first rebound in the same period.

In that same time period, we have not slowed down the pace of our economic restructuring. The McKinsey Global Institute’s latest report shows that, from 2015-2018, for 11 quarters, consumption contributed to more than 60% of our growth. At this rate, the Chinese market will outperform the American market this year, becoming the largest consumer market in the world. The share of our exports relative to our GDP has also gone from 17% in 2007 to 9% today. Laurence Boone, head economist for the Organization for Economic Cooperation and Development, finds that the Chinese economy is in a rebalancing phase. Stephen S. Roach, an experienced researcher at Yale University, emphasizes that the dynamic growth of the service sector in China plays a role in strengthening the global economy.

At a time when the world is seeing increased mergers in industrial fields, the escalation of the Chinese-American trade conflict is not a happy event for other countries. Sixty percent of Chinese exports to the United States are produced by foreign companies, including European companies with locations in China. The International Monetary Fund lowered its growth predictions for the EU for this year to 1.3%, down from 1.6% at the beginning of the year.

But, worse yet, the United States’ brutality where trade is concerned does not only affect China. At the present moment, no country can consider itself safe from the flames, much less imagine that it will be able to plunder the house as it burns. In fact, on that point, the interests of all countries are tightly linked, and their futures are interdependent. Isn’t it time to come together to say “No” to unilateralism and protectionism?