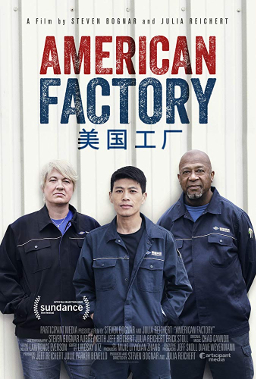 “Our great American companies are hereby ordered to immediately start looking for an alternative to China, including bringing your companies HOME and making your products in the USA,” stormed the American president on Twitter Friday morning. Alas for Americans who count on this happening, it has bad effects. The documentary “American Factory,” just out on Netflix, demonstrates this clearly.

Despite the enthusiasm of American workers who have found new work at this windshield factory and the Chinese magnate’s sincere wish for his transplantation in America to succeed, the two work cultures will never fuse. Their juxtaposition has only revealed the unbridgeable gulf between them.

The story takes place in the town of Moraine, near Dayton, Ohio, where the closure of a General Motors Co. factory at the height of the 2008 financial crisis put 2,000 families out of work. However, there are examples everywhere of regions that have lost their main employer. This foul trap in which hundreds of people lose something that gave meaning to their lives, along with their livelihood, has been seen before.

Viewers can understand the workers’ relief at the return of their jobs, and also their confusion at a situation that is unlike anything they knew before. For instance, an inspector who made $29 an hour with GM makes less than half that with Fuyao. And it is not just the money; the demanding work, poor security and lack of recognition all take their toll on bodies and morale.

Co-directed by an Ohio couple, this film is the first from Higher Ground, a production company owned by Barack and Michelle Obama. But it was only after seeing it at the Sundance Film Festival, where it won first prize for best direction of an American documentary, that the Obamas joined their names to it. That did not stop a journalist on Politico from calling it “the Obamas’ first big anti-Trump statement” ahead of the 2020 election. Yet, as a conservative news site points out, the Obamas boasted of having tried to lure Fuyao to America in 2014.

Thus, even though the film is not overtly partisan, it must necessarily be viewed through a political prism. It is particularly unkind to Donald Trump’s pretensions of helping the working class.

Of course, when the president speaks of bringing back factories and jobs, he mainly means American companies. But when a factory operates, it must be able to sell its product at competitive prices. Some are doing very well in America, evidently. Then, when it finds itself with a competitor like Fuyao, whose factories can depend on an obedient but keen workforce, as well as less strict safety and pollution controls, the idea of bringing such companies over to America is harder to accept.

It was not for no reason that the Western multinationals offshored their factories or subcontracted their manufacturing, nor is it coincidental that contracts which used to go to China now go to countries with even lower production costs, such as Vietnam.

In his barrage of fierce criticism in last Friday’s tweet, Trump began by denouncing China’s intellectual property theft over the years. At this point, one can only agree. This is the fight he will have to focus on instead of creating a shining image of “the good old days.”