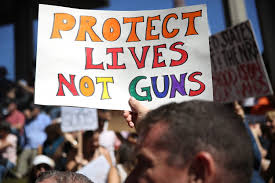 Emotions are never a good guide when it comes to solving societal problems.

Again, a crazed gunman, this time in Texas, where, on Sunday of all days, relaxed gun ownership laws went into effect. Again there is discussion about restricting gun ownership in the U.S. Again the Democrats are for it, again the Republicans hesitantly show restraint. This recurring cycle is alternately grueling, ending with capitulation and shrugs, or it fuels grief, consternation and anger. However, emotions are never a good guide when it comes to solving societal problems.

So, here are some sobering numbers: The U.S. is the only country in the world in which there are more weapons in private hands than there are residents living in the country. According to the Small Arms Survey by the Graduate Institute of International and Development Studies in Geneva, there are 120 firearms for every 100 U.S. citizens. (In Austria, there are 30 firearms per 100 residents.) American civilians own 100 times more weapons than the U.S. military and 400 times more than law enforcement agencies, standing patriotically beneath the Star Spangled Banner.

Moreover, the link between the availability of weapons and gun-related fatalities has been proved: In the U.S., this death toll adds up to approximately 12 per 100,000 residents. In Austria or Germany, that number is 1 per 100,000.

These facts should speak for themselves.