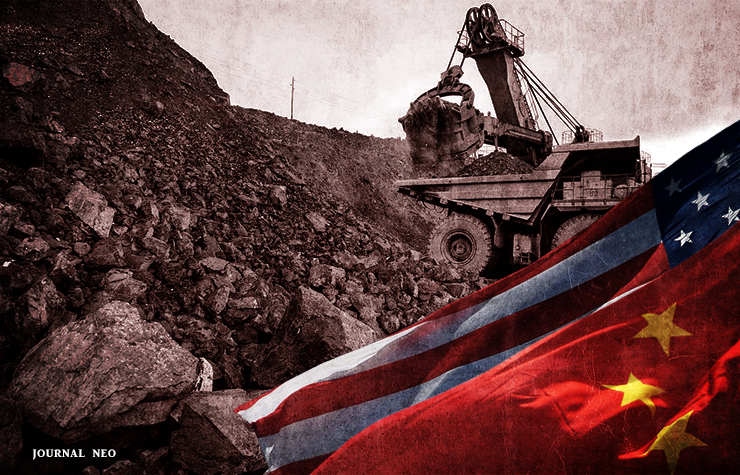 Washington has long been interested in this autonomous and sparsely populated Arctic continent. But why did the current American president offer to buy it from Denmark, which has led to diplomatic crisis? To increase his reserves of hydrocarbons? To get his hands on a sub-soil reputed to be rich in “rare-earth metals,” thereby reducing the risk of a possible Chinese embargo on these key minerals? …

Hydrocarbon deposits were presented as the goal of a possible purchase of Greenland by Donald Trump, which is probably inaccurate. First, the United States has more than enough oil and shale gas, so much so that they export it. And what’s more, recent underwater campaigns by a few major companies exploring hydrocarbons off the coast of Nuuk have discouraged possible exploitation because of the environmental problems specific to the Far North.

As well as the Russian-American geopolitical aspect inherited from the former Cold War, the real objective would be within the context of the current American-Chinese trade war. The United States would seek to counter the potential, perhaps imaginary, threat of a Chinese embargo on exports of lanthanide (rare-earth metal) products produced in Beijing’s factories; products which are used in particular by the U.S. military. But the weapon is double-edged: Such a blockade by Beijing would, in turn, create further embargoes on other resources between China and Washington, then, by snowball effect, also between other countries allied to each side. The world of natural resources is never a one-way street.

Let’s return to Greenland’s rare-earth metals: China used to control about 90% of lanthanide mines worldwide, but this share is decreasing to 70%. And these figures do not account for the possible exploitation of new resources, notably those off Nuuk, which has two mining projects (Tanbreez Mining, and Greenland Minerals) still in the process of authorization. Harnessing these two mines would further weaken Beijing’s dominant position.

But Trump will not buy Greenland: not only because Denmark and Greenland are currently opposed to it, but above all because the European industry could have other projects in mind for these lanthanides, as part of a new European Arctic policy.

Obstacles on the Road to La Rochelle (and Not Just Icebergs)

Indeed, Europe, and in particular, France, should decide whether certain lanthanides are strategic materials for them, with coordinated European policy in mind. If that were the case, then the rare-earth refinery in La Rochelle − ideally located to receive Greenland’s ores by ship − would become the only lanthanide processing plant outside China, since no such facility exists in the United States, which limits Washington’s bragging rights. This refinery in France could be the starting point for a large-scale European industry, in direct competition with Chinese factories, and capable of supplying the electrical industries with permanent magnets.

But to get there, Tanbreez Mining and Greenland Minerals would have to develop an interest. These two companies are Australian, and the latter, which has the best reserves, has Shenge Resources, a Chinese company as its largest shareholder. How can Greenland Minerals be encouraged to divert the flow from its Kvanefjeld mine to La Rochelle, when it has formed a joint venture with China National Nuclear Corporation to assure its future production in China? Should European funding be directed towards it, or should a European lanthanide metalworking industry operate downstream of La Rochelle’s plant?

Or, we should point out that the future maritime route of ores will necessarily pass through seas that do not yet exist − because they are frozen in ice. Protecting the environment will prohibit this prospective transport. Given where we are at with climate change, this ecological perspective is probably an additional factor in favor of a European solution.

Trump or the Art of Geopolitical Diversion

Trump’s statement therefore seemed to be a maneuver, a diversion, a ploy in his fight against Beijing. And if he is really interested in countering Chinese intimidation regarding lanthanides, his most effective strategy remains to produce rare-earth metals from the American subsoil: The Mountain Pass mine in California can supply the country, just as other deposits located in Texas, Colorado, Wyoming or Alaska could be harnessed.

Finally, this “Trumpian” episode confirms once again that the phrase “rare metals” is absolute nonsense and idiocy, since by simply producing them, they are reduced to their geopolitical stakes. It is also a new indication that the natural resources of the Far North should be protected by a new strategy of European influence in the Arctic.

The author is a specialist in the market of raw materials.