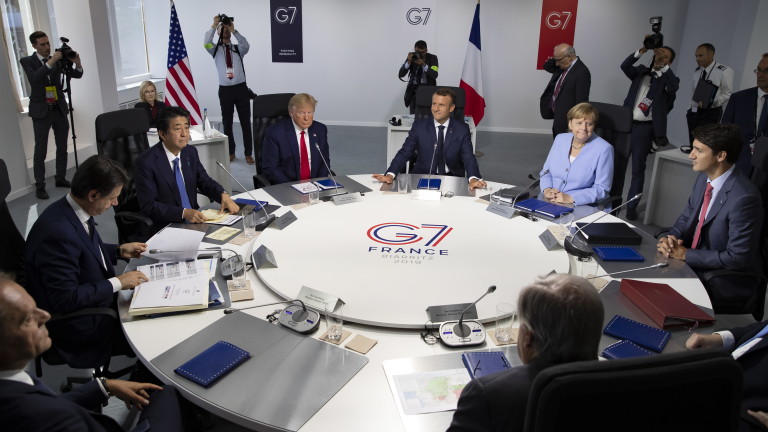 It was as if you were in a pub, and about to reward your thirst with another alcoholic trophy, and as you take an Olympic sip to finish the glass, the waiter preemptively ends your future alcoholic ambitions by strongly hinting that the establishment is closing.

Here’s how one observer feels about the Group of Seven summit of major industrial nations recently held in the French resort town of Biarritz: There was an investment of considerable time and energy, with the expectation that it would feature some intoxicating high or news, but the event concluded without anything like that happening.

If one could conjure up the looming forehead of Hristo Botev, the world would look like a pub again, with political leaders gathered around the table in Biarritz seemingly ready to negotiate anything, some bit of land, Greenland perhaps, or a Brexit backstop, or sanctions, perhaps against Iranian oil or U.S. sanctions against China.*

Yes, the world today is different from the romantic pub clamor of Braila during the third quarter of the 19th century, when Bulgarian outcasts, still drunk and in exile, targeted Ottomans with rousing speeches and bullets, from time to time.

Today, the world is at least digital. Perhaps this is the reason why France is preparing to impose a tax on digital services, principally making U.S. companies, like Facebook, Amazon and Google vulnerable. In response, the U.S. has considered imposing reciprocal duties on French wine.

But there’s one thing that hasn’t changed. There is something arrogant and insistent that remains on the table like a bill for the empty glasses. This is vanity, as Botev would say, the vanity of all vanities. Vanity, which has spread precisely in a way that French author, Victor Hugo, having seen Biarritz for the first time, prayed would “never become fashionable.”

Vanity, however, is another name for French President Emmanuel Macron, who preemptively undermined any chance of achieving real success at the G-7. How? By designing the agenda for the event primarily for his own domestic political purposes. In Macron’s ideological soup, gender inequality and climate change are as necessary as meatballs in a meatball soup.

This was the the first provocation that Macron dared to make with the visiting American delegation. The U.S. had a completely different agenda: security (China’s Huawei and the construction of a 5G network in Europe, as well as the relationship with Iran); and the economy (cutting back regulations and taxes and the trade war with China).

Inviting Donald Trump to comment on the state of women’s rights in Africa is like having the U.S, which will host the next G-7 summit, feature discussion on climate change as a Chinese trick and inviting the French president to be the keynote speaker at the forum.

The second provocation by the French hosts came when they invited Iranian Foreign Minister Mohammad Javad Zarif to attend the second day of the forum. This author does not believe that there is anything wrong in attempting a dialogue with Iran, but the chosen place and time were extremely biased (especially since Zarif was already in France that Friday).

There was also a third provocation by the French: Macron’s wish that the G-7 issue a mandate to negotiate with Iran. And, even though the media widely reported that Macron got his mandate, the news came from a man who is part of the French president’s team. Nothing seems to indicate that Macron received a green light from the U.S. or Japan. This means that Macron will continue talking to Iran the same way he has in the past: on behalf of France and, at best, on behalf of the European Union.

However, despite how Americans feel about it, the arrival of Zarif in Biarritz saved the G-7 forum. If Iran’s foreign minister had not been present, it would have been very difficult for the media to find any headline news in the G-7 summit. (The start of yet additional trade talks between the U.S. and China will not be news for a year.) And it was something to divert the attention of female reporters from the ever more colorful socks of Canadian Prime Minister Justin Trudeau. The ability of his socks to gain attention on the international stage has already begun to fade.

This does not mean, of course, that the European-Iranian dialogue is making progress. France, whose positions are clearly dominating European policy toward Tehran, had some worthwhile suggestions. For example, France proposed the creation of a credit line to Iran and the partial elimination of sanctions associated with the sale of oil so the ayatollahs’ regime can find their way back to the nuclear deal. There are other examples. However, the French are not only giving something to Iran; they are also demanding the inclusion of the country’s ballistic program and its proxy policies in neighboring countries as part of the revised nuclear deal. Those last conditions explain why there is no progress in the dialogue with Iran.

On a par with the arrival of Iran’s foreign minister at the French resort, the other actual news from the G-7 meeting is that the U.S. and Japan are already very close to concluding a free trade agreement. This would lead to the abolition and/or reduction of Japanese customs duties for American crops and meat, as well as American duties for Japanese automobile exports.

Of course, there are risks in politics, as Japan Prime Minister Shinzo Abe may have realized at the joint press conference with Trump when Japan said it is committed to buying American corn originally destined for the Chinese market, and which, until now, because of the trade war between Washington and Beijing, remains unsold in warehouses.

And while the meeting in Biarritz was taking place, a joke made the rounds on Twitter. The tweet said that British Prime Minister Boris Johnson has only two priorities at the G-7 forum: to find and kiss the American president’s behind. Alas, however, perhaps contrary to public opinion, Johnson was the only leader among those present who, before and during the meeting with Trump, said that the trade war would lead the world into an economic downturn. And this was one of the presumed reasons for Trump’s early departure from last year’s G-7 summit in Canada. In addition, the British prime minister also tempered Trump’s enthusiasm with respect to concluding a free trade agreement between the two countries within a year.

In Biarritz, Johnson had no intention of fighting gender inequality, and he knew perfectly well that this was not a Brexit negotiating forum. He went there pragmatically to seek U.S. support for George Osborne’s candidacy as the head of the International Monetary Fund. Nevertheless, the British prime minister, as did his predecessor, Theresa May, stood firmly behind European positions on climate change and Iran. On these two topics, there is a general Franco-German-British consensus that opposes Washington’s alternative policies. There is one nuance in this situation, of course, and it is that London, unlike the other two key European capitals, joined with Americans in sending warships to guard the Strait of Hormuz.

So far, so good, with the European consensus. Another despicable move by Macron caused Germany and Britain to turn against France. It concerned Macron’s statement that the EU will postpone ratification of the free trade agreement concluded earlier this year with the MERCOSUR countries of Brazil, Argentina, Paraguay and Uruguay, because France felt that the measures which Brazil’s President Jair Bolsonaro took to fight the fires burning in the were insufficient.** This only fed the misunderstanding between Berlin and Paris, whose representatives came to Biarritz with already different perspectives regarding the so-called backstop mechanism of Brexit. (France opposes removing or renegotiating the backstop, whereas Germany seems more inclined to replace it with something else.)

Generally speaking, during the G-7 summit in France, Macron aimed at building up the forum ideologically for his own political purposes, but also wanted to save French wine. Trump was focused on selling corn, and Johnson lobbied for the editor-in-chief who backed him when he ran for prime minister.

Although everyone can drink different amounts of alcohol in a pub and achieve the same effect, in politics the difference in tastes can hardly lead to anything productive. After all, that’s the idea behind pubs. They present an opportunity to collect world views, and provide an alibi .Only alcoholics drink at home alone.

*Editor’s Note: Hristo Botev (1848-1876) was a Bulgarian poet and revolutionary, regarded in Bulgaria as a national hero.

**Editor’s Note: MERCOSUR is the acronym for Mercado Común del Cono Sur, the Common Market of the Southern Cone.

About Nelly Keavney 47 Articles
I am a native, Bulgarian translator, with passion for travel, politics, and literature. I have been living in the UK since 2010 and recently received my British citizenship. I love connecting people and language is the best vehicle one can have to "carry people across" different cultures and ideas.