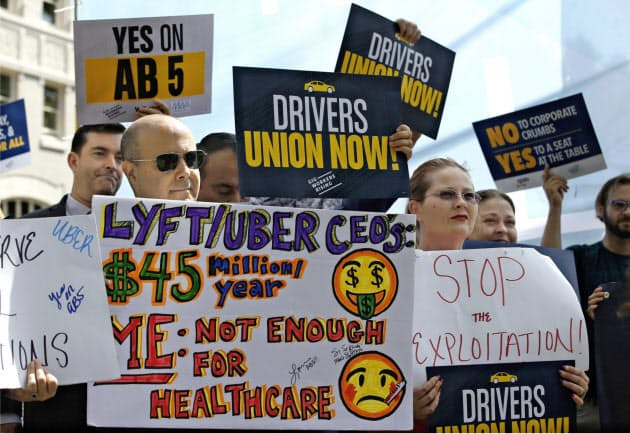 In California, a new law has been passed that will force businesses to treat individuals who have been contracted to work over the internet as employees. It will take effect in January 2020. The law will oblige businesses to offer a minimum wage and unemployment insurance.

In the background is deep-rooted discontent at how firms like the large-scale American car dispatch service Uber Technologies treat their contractors. It is fair to say that it has caused a stir regarding how best to protect the independently employed. But it is also certain that businesses’ cost burden will increase. Worries that this could dampen the force of the sharing economy, which has a high growth potential, cannot be dismissed.

To set a definition for independent employers, the new law uses principles such as individuals remaining outside of a company’s administration and direction, and performing work other than the normal operations of a company. If these conditions are not fulfilled, the company is forced to accept the responsibilities of treating its workers as employees in an employment relationship. It is possible that many companies that act as agents between people and jobs online could fall within this scope.

It is undeniable there is fear that lifestyles will grow unsustainable with work patterns like Uber’s, whose drivers accept work on a case-by-case basis.

However, if, because of this, management principles like the responsibility of employment are foisted upon businesses, it could dampen their growth potential and throw cold water on the expanding work possibilities of information technology.

The foundation of improved working conditions is for individuals to learn only the skills that will let them transfer to a position with better conditions. Expanding the possibilities for and improving the quality of career training is a topic of worldwide discussion.

Even in Japan, policies to protect the independently employed who do not qualify for unemployment insurance or workers’ compensation,are under consideration. The viewpoint that one must foster an environment to let workers find jobs with good working conditions by their own efforts is essential. It is also important to maintain a labor market with high fluidity.

Mediating agencies like Uber assumed that their workers would accept part-time jobs, but in reality the number who work full-time is increasing. Nonetheless, it’s fair to say that consideration for the stability of their livelihoods is lacking. We should be well aware that this work model will not continue if mistakes are made in the response to the workers.