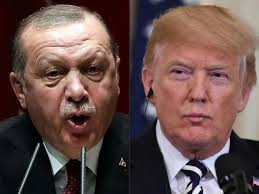 There is now danger of a new front and new battles in Syria that will cost the lives of thousands of people. The Europeans will also feel the effects directly.

This time, Donald Trump did not announce the withdrawal on Twitter, as he did in December 2018. According to a businesslike announcement from the White House, the president spoke on the phone with his Turkish counterpart Recep Tayyip Erdoğan. Turkey would attack northern Syria and the U.S. would no longer have a presence in the immediate surroundings.

With that, Trump once again acted impulsively, making a decision that caught all U.S. allies off guard, from the Kurds to Great Britain to France, and simultaneously undermined the efforts of his own government. His administration was in the process of executing security arrangements with the Kurds that accommodated Ankara’s reservations but also were supposed to stop Turkey’s advance into Syria.

Because Trump had let himself to be gradually convinced by advisers that his announcement in December of a complete troop withdrawal from Syria was a mistake, American troops began moving out of areas near the border on the morning after the phone call with Erdoğan. Now the danger is that a new front will open in Syria and new battles will begin, which could cost the lives of thousands of people and drive hundreds of thousands to flee, instead of settling Syrian refugees there, as Erdoğan is planning.

Trump is completely abandoning the Kurds, who as American allies in the fight against the Islamic State terrorist group bore the heaviest burden and lost thousands of their soldiers. The Americans can hardly expect their shocked partners to listen to calls for restraint. The Kurds have already announced that they will use every means to defend themselves.

Trump Is Jeopardizing Success in the Fight against the Islamic State

Those in the region who are profiting – Iran, the Syrian regime of Bashar Assad, and Russia – have been anything but friendly with the U.S. and its traditional allies. Furthermore, Trump is jeopardizing the success achieved in the fight against the so-called Islamic State group, which has new cells not only in Syria, but also in neighboring Iraq.

It is hypocritical for the White House to justify its approval of invasion by Turkey, which, it should be added, is hardly legal under international law, by claiming that Europe refused to take captured Islamic State group soldiers and that the U.S. was not prepared to spend tax dollars on doing that. The Kurds (whom Trump is now abandoning) are holding the Islamic State group captive, and in the plans that Erdoğan presented to the U.N. General Assembly, there was no mention of Turkey taking over the problematic al-Hol refugee camp.

Brett McGurk, Trump’s former special presidential envoy for the Global Coalition to Counter the Islamic State of Iraq and the Levant, spoke of a “defect at the core of U.S. foreign policies across the board … maximalist objectives … a minimalist president … [with] no process to assess facts … or prepare contingencies.”

McGurk also spoke about false assertions and lack of details, even details on how far Erdoğan’s proposed security zone should extend. Many cities are situated close to the border, and the Kurds will not let themselves be driven out without a fight. Europeans will also feel the effects directly. They must urgently consider how they can minimize the anticipated damage, because the people who will have to flee from the offensive will try to reach Europe. Despite Erdoğan’s demands, the EU cannot help finance or support the plan to resettle Syrian refugees from Turkey. Thus, the EU’s refugee deal with Ankara may also come into question again.