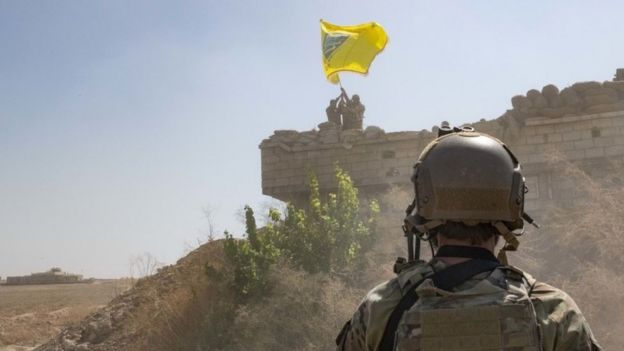 On the second day of the Turkish military offensive against Kurds in northern Syria, more than 60,000 civilians have already taken the road to exodus, exacerbating the confusion in this fragile region.

However, despite an international outcry, nothing seems to point to a rapid halt to the operation launched by Turkish President Recep Erdogan. An in-depth look at the serious crisis in four questions.

Who Are the Kurds of the YPG?

In particular, they control the detention in camps of several thousand jihadis and their families, whom European countries refuse to repatriate. Applauded by the West, notably for including women in their ranks, the YPG had hoped that the crucial role they played during and after the fight against the Islamic State group would assure the international community’s support for their cause.

Why Is Turkey Attacking the Region?

Erdogan wants to avoid a Kurdish domino effect at all costs. “If the YPG doesn’t currently exert an actual physical threat to Turkey, it is because Kurdish Syrians are close to Kurdish Turks for tribal, familial, linguistic and political reasons,” explains Jean Marcou, teacher-researcher at the Grenoble Institute of Political Studies. “Turkey fears the formation of an independent Kurdish zone on its border that would constitute a support base for the PKK guerilla forces.” The Kurdistan Workers’ Party (PKK), classed as terrorists by Ankara and the European Union, has engaged in war for 30 years in Ankara, causing over 40,000 deaths.

The offensive that Erdogan dreams about so much would also allow him to expand his control over the border and his influence in the conflict resolution, all while tending to his popularity in Turkey. “Having welcomed 3.6 million Syrian refugees since 2011, the Turkish president is now faced with massive discontent among popular opinion, one of the reasons for his recent political setbacks,” remarks Marcou. “Since then, he’s explained that his military offensives aim to create a safe zone in order to reinstall the Syrian refugees. But this plan hardly seems realistic for humanitarian and material reasons like finances.”

Has Donald Trump Betrayed the Kurds?

Instead of creating a safe zone as agreed, on Sunday, Trump suddenly announced the retreat of American troops − although not great in number − determined to leave the Middle Eastern quagmire that the United States has been stuck in for 20 years. These allies to whom they owe so much are left at the mercy of the Turkish army and its auxiliaries − militias largely made up of … former jihadis!

“The global coalition has only ever carried out air strikes and has not sent troops to fight on the ground,” states Marcou. “The only ones who have really fought the Islamic State on the ground in a determined way are the YPG.”

What Are the Repercussions for Europe?

Under assault from the Turks, the Kurdish forces’ priority is no longer to watch over the proper detention of jihadis, but to defend themselves to assure their survival. “To destabilize Turkey, the YPG may be tempted to liberate the thousands of Islamic State jihadis detained in their camps,” confirms the professor of political science and expert on Turkey, Jana Jabbour. “This represents a danger for the EU that could assist in the return of its radicalized nationals in Syria and become the victim of a new wave of terrorist attacks.”