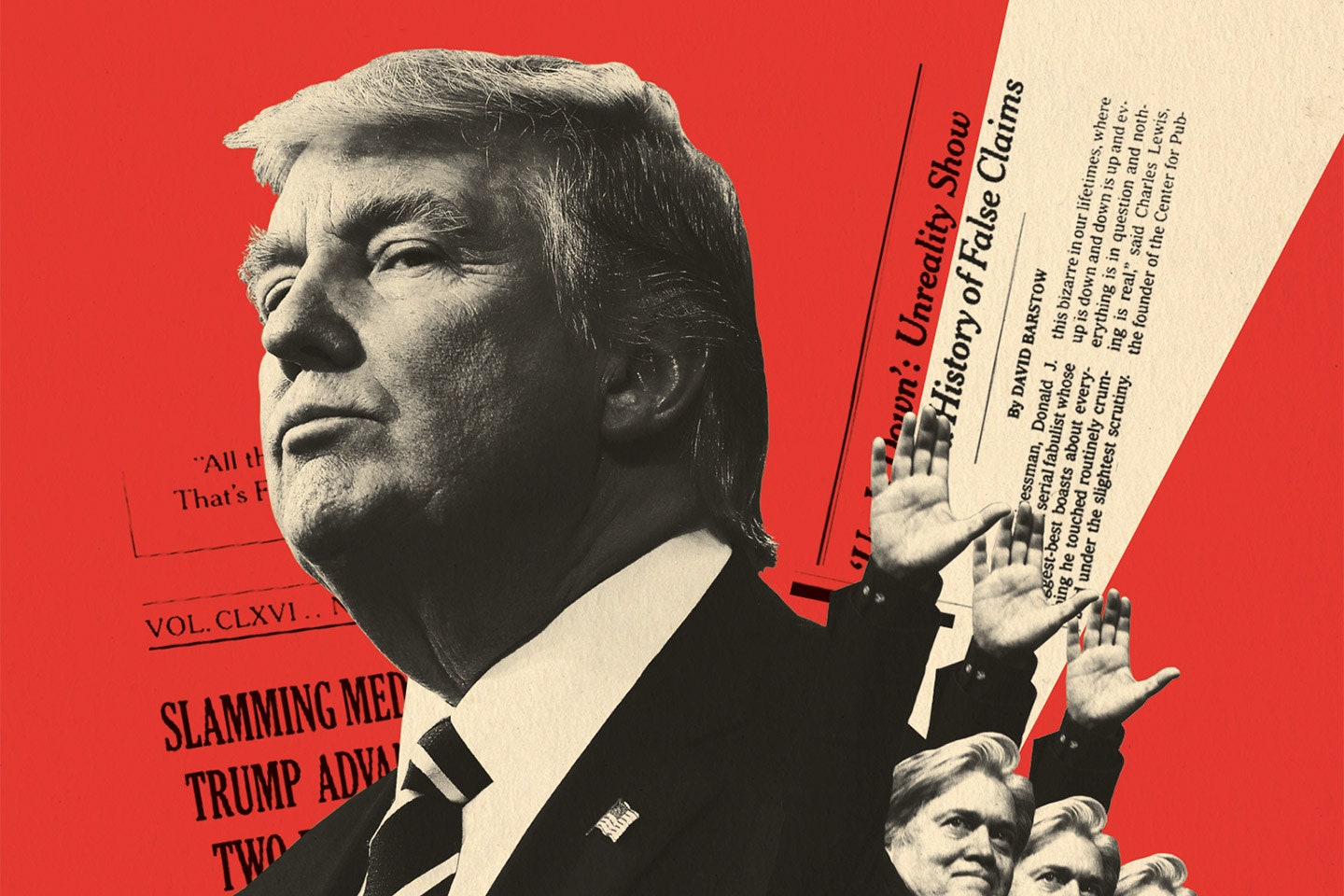 All authoritarianism and extremism, on the right or left, agree that the media should be in favor of their madness and faithful to their dictates.

The dangerous virus of hatred for the press and media in general has arrived in Brazil, spread by President Donald Trump, and it is infecting the authoritarian ventures of the world’s new extreme right, a mixture of modern Nazism and fascism. It is something that is shown by the fact that every day, President Jair Bolsonaro intensifies his attacks against such communication outlets, which he directly accuses of creating a “negative image” of himself and of Brazil in the world. His sons, some of his ministers and even Gen. Augusto Heleno join him in this discourse.

But it is Bolsonaro who most dedicates himself to attacking the press when he can. In his famous “lives,” (live video transmissions on social media), the press was the second most frequently mentioned topic up until last Sept. 19, according to the newspaper Metropole, which has analyzed all the live transmissions Bolsonaro has made to his voters since he assumed power. The most cited issue was the reform of Prevedencia.* At a breakfast with foreign correspondents in which Carla Jimenez, director of the Brazilian edition of El Pais, participated, the president accused the Brazilian press of poisoning his image abroad, saying, “I understand perfectly the extent of the poisoning of Brazil to the outside world.”

The local newspapers reported that in his recent visit to the U.N., Bolsonaro told Trump he loved him. (“I love you.”) Apparently this love inoculated Bolsonaro with the formula for hatred of the media and the strategy, which has started to infect the whole world, the formula for calling any news that simply displeases him “fake news.”

We know, however, that throughout history, all apprentice dictators have begun with being irritated by criticism from the press, and have ended up shutting the press down or transforming it into a loyal tool, such as occurred with fascism, Nazism and Francoism, for example. Hence it has already become a classic in politics that when political leaders view the press as an anathema, it is the harbinger of dictatorial impulses.

All authoritarians and extremists of the left and the right agree that the media, for the sake of the homeland, must be in favor of their madness and loyal to their dictates, especially when one considers that such extremist movements often are impregnated with religious mysticism and nationalistic ravings.

It’s strange that in Brazil, one of the president’s sons, federal deputy Eduardo Bolsonaro (PLS-SP), who was nominated as nothing less than the ambassador to the U.S., candidly admitted that his father’s administration, which he baptized euphemistically as being “conservative,” still couldn’t count on a conservative press because he was elected “without a conservative university, an organized conservative militancy, and a conservative party.” He added, “That’s why we don’t have a conservative press either.”

This statement makes sense to Bolsonaro’s most radical supporters, who assume the pain of their rulers. They are encouraged to dream about a power that dominates everything, incapable of living with differences, or with a free press capable of reporting freely. Following the arrival of that power, the press is transformed into an enemy the government needs to fight, including making death threats to journalists who do not kneel.

This is what American journalist Jim Acosta of CNN, author of the book, “The Enemy of the People,” recently decried in an interview with Folha de S.Paulo. Acosta, who was publicly humiliated by Trump for asking questions the president did not like, has received death threats to him and his family. This is unusual in the United States, where there has always been maximum freedom of expression by the media under all presidents of all persuasions.

The truth is that no government, however progressive, likes criticism from the press. For government, the media should serve overall to report the good they are doing for the people, and they feel it is better if the press overlooks their sins. They would prefer all the press to be aseptic, or even complacent. The difference is that, for dictators and those who aspire to be, “not liking critics” is not enough; they prefer to mute them, eliminating the protagonists if necessary.

To test the level of democratic maturity of a government or of a president, just measure their capacity to accept criticism and respect the sacred law of freedom of expression, when their temptation is to bend or eliminate it. And at the same time, the media, which are not always innocent either, measure their degree of democracy in the fact that they do not fail to report about the excesses of power. There are times when it is precisely the press that has the sacred responsibility to denounce without mincing words: when a democracy starts to be visibly threatened.

In the history of aberrant persecution, we speak not just of journalists, but of ideas. When we speak of freedom of expression and of ideas, it is impossible to forget the famous public book burning in Nazi Germany, just because the authors didn’t agree with Hitler’s ideas. The regime organized a march with torches, and 25,000 books were burned in public, among them works by Sigmund Freud, Albert Einstein and Ernest Hemingway pulled from libraries and bookshops.

At the time, deaf and blind writer and activist Helen Keller raised her voice to declare, “Tyranny can’t defeat the power of ideas.” It didn’t help that “blind love” for the power of change was then forcibly taught in schools.

Brazil has already lived with censorship during the dictatorship, when papers which had even supported the military coup, such as Estadao de Sao Paulo, published recipes or poems of Luis de Camoes in place of his censured texts. But it is serious when we begin to hear the bells of authoritarian temptation and neo-Nazi and fascist nostalgia ringing abroad. So far we are not burning books, but all lovers of democracy and freedom of expression were already scared when a book of children’s literature with illustrations of a gay couple was recalled from the important Rio de Janeiro book Biennial.

In Germany, Hitler exalted the “cleansing of the German spirit,” which was the passport to all aberrations, and proclaimed the slogan, copied today by the Brazilian president, “Germany above all.” Here it is “Brazil above all” and beyond this, “God above all.” What God? In Italy, Benito Mussolini, who was a militant atheist, ended up defending the Vatican and kissing the pope’s ring. He even baptized his sons as Catholics. The votes of the church were worth this and much more.

In Spain, Francisco Franco, who was considered a military man without religion, ended up in a street procession, with the pope’s privilege of walking under the canopy as the Blessed Sacrament, accompanied by bishops and cardinals who fell silent when the Caudillo started to control the media, placing censors even inside the newspapers, which decided what to publish based on the good of the homeland.

Only when the first free newspapers started to reach the streets in Spain after the dictator’s death in 1975 (I have been writing for them ever since), did people know that the barbarity of one of the longest and toughest dictators of Europe was over and that liberty had been reborn.

Shortly after the reestablishment of democracy, there were still echoes of authoritarian impulses. On Feb. 23, 1981, the military attacked the Congress during voting in Madrid. With arms in hand, Lt. Col. Antonio Tejero took control, and did not hide his intention to retake power with the military. King Juan Carlos repudiated the movement, while the army’s tanks headed over to assume control of El Pais. With adrenalin pumping, the acting editor at the time, Juan Luis Cebrian, and his staff needed to react quickly. In order to inform the Spanish people about the risk of falling again into authoritarian hands, they produced a special edition of the paper, the front page carrying a headline in large letters: “Coup d’état, El PAIS with the Constitution.”

They rapidly wrote an editorial saying that whatever happened in the following hours, the newspaper would be in favor of the constitution and of democracy. The special edition was distributed from hand to hand on the streets to let people know what had happened and to strengthen the resistance. There was a special mission to send a copy with the tough editorial to the militarily occupied Congress. Thus, those attempting the coup would know that they could not take power so easily. When the copy of El Pais reached the Congress, the journalists present understood that the coup had failed and democracy had won.

*Editor’s note: The author is referring to pension reform.