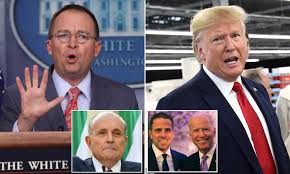 After weeks of denying that Donald Trump withheld foreign aid from Ukraine on the condition that his personal demands were met, the White House’s own acting chief of staff dropped a bombshell by admitting to the allegations publicly.

What’s known today as the Ukraine scandal, which served as the basis for the Democrats’ decision to formally initiate an impeachment inquiry, essentially boils down to the telephone conversation between Trump and the Ukrainian president in which Trump, after announcing that American aid was being withheld, made two requests of his counterpart.

As stated in the transcript of the conversation, the first request was to investigate the record of Trump’s Democratic rival, Joe Biden, and his background in Ukraine. Trump then went on to ask for a Ukrainian investigation into the 2016 presidential election, based on the idea, discredited by the U.S. intelligence community, that the Democratic Party asked a major cybersecurity company in California to look into the theft of sensitive party information during the campaign. According to a conspiracy theory, the party’s data was then hidden and transferred to Ukraine.

In the immediate context of the conversation, Trump made both of these requests right after the Ukrainian president said his country was prepared to acquire military aircraft under the provisions of the military assistance package approved by Congress.

For weeks, the White House has consistently denied that the president requested the two personal favors in exchange for the aid. Such an act flies in the face of the U.S. Constitution, because the president would be trading requests for personal benefit with a foreign country in order to manipulate America’s own internal affairs, including its elections, and to advance his own private interests. This quid pro quo accusation is the foundation on which the Democrats have now launched an impeachment inquiry.

Even more surprising then was Acting White House Chief of Staff Mick Mulvaney’s public acknowledgment of the exact opposite of what the White House had been saying for weeks. Speaking to a crowd of reporters at the White House, Mulvaney said, “I have news for everybody. Get over it. There is going to be political influence in foreign policy.” He added, “Did [Trump] also mention to me in the past the corruption that related to the DNC server? Absolutely … That’s why we held up the money.” Mulvaney confirmed that “the look back to what happened in 2016 certainly was part of the thing [Trump] was worried about in corruption with that nation.”

When one reporter told Mulvaney that what he had just described was the quid pro quo behavior forbidden by the nation’s Constitution, he responded, “We do that all the time with foreign policy.”

This bombshell confession came just hours after the U.S. ambassador to the EU confirmed that Trump had asked him to cooperate with Rudy Giuliani, his personal lawyer, on U.S. foreign policy toward Ukraine. Yet Giuliani does not hold any position in the administration.

But Trump himself provided the last bit of ammunition for impeachment when the White House announced the official decision, coming from Trump himself, to use one of his private properties in Miami as a venue for the next summit of the Group of Seven leading industrialized nations! The emoluments clause of the U.S. Constitution explicitly forbids the president’s personal financial gain from foreign countries as well any money from the U.S. government other than his salary as president. Given that he walked back from the controversial decision, Trump must have realized that he’s been helping an impeachment proceeding pointed squarely at himself!