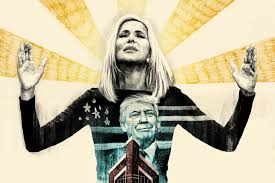 “Eeeeeeeeeeeeeeeeeeeeeeeeeeh! Modára-bakasaka karabaka-sakatará.” This is known as glossolalia or speaking in tongues. Whether the spelling is correct, I have no idea; I wrote it down phonetically. What it means exactly, I do not know either, but I suspect that the literal translation will be something like this: “There’ll be no doubt in your mind, you’ll believe everything I’m saying, if you wanna get closer to Him, get on your knees and start paying,” as sung by Apostle Phil Collins in “Jesus He Know Me” (Genesis, 1991). That’s because the person who utters this quasi-religious crazy-speak with great conviction in a room full of gullible people is mainly interested in money. And power. But mainly money.

Televangelist Paula White-Cain is the new spiritual adviser to the White House. She has unofficially held this position for a few years, but President Donald Trump recently appointed her formally to lead the Faith and Opportunity Initiative, which aims at giving evangelical groups more influence in various government programs. As a result, evangelists like White-Cain get more control over topics like freedom of religion and reducing poverty, two strategic themes. More religious freedom, that speaks for itself; less poverty means more potential donors.

Since the appointment, I have seen the same clip on social media dozens of times. It was composed by the online news site “NowThis News” from different footage in which White-Cain appears. The preacher emerges like a frighteningly female fanatic, Jesus’ personal sock puppet on earth, who declares the White House to be “holy ground” and claims that “to say no to President Trump would be saying no to God.” The excerpt in which she is ranting in tongues, in a bright red dress and with a raised fist, appears twice.

It is a smartly edited thing, created by a platform that regularly posts smartly edited things on Twitter, which are activist driven and therefore manipulative. I was so not going to fall for that. But after a day of searching for White-Cain, not that mad caricature who was served up above, but a more objective, more genuine version of the woman who says that her injuries are her greatest blessings, I was exhausted and on the ropes. As it turns out, there is no other version, this was it.

But this was not so according to White-Cain, of course. She says that she is demonized, literally. On her Twitter account, she likes to warn of “haters” and “the enemy” who have dug “demonic traps.” By that she mostly means the media, just like her idol, the president. Also, her crowd of followers complain that the media is presenting a mistaken image of the preacher.

But let’s be fair. You don’t need much to paint precisely the crazy picture the rest of the world now has of her, “demonic” video or not. Because even though her website shows delightful pictures of her feeding the hungry, refreshing the thirsty and dressing the naked (okay, not that last one), White-Cain, a follower of the “prosperity gospel,” in the meantime, unabashedly cajoles the poorest of the poor into giving up their money, in name of Jesus, of course. For $130 dollars apiece, she sells “Favor Seeds,” a type of indulgence with which you can make all your problems disappear like melting snow. In addition, she repeatedly asks her followers for money, starting at $3,500, because only then will God reward the donors with more. And of course, she is quite comfortable.

The image is nothing new. As mentioned above, Collins sang about this in 1991 in response to controversial televangelists like Ernest Angley, who also liked to speak in tongues and was interested in financial gain in a supernatural way. It is also nothing new that American presidents receive advice from evangelicals. For decades, preacher Billy Graham was a close acquaintance of the White House. But however strong his influence was at times, he was not on the payroll.

White-Cain is. She now has a seat at the table next to Trump, who is clearly amendable to letting her manipulate him. An official White House photo shows White-Cain—it’s beautiful, by the way, how her name is a combination of her new place of work and a biblical figure who often represents greed and evil—praying together with 24 other preachers for Trump’s salvation and against the “demonic” impeachment process. It is terrifying.

Still, I look forward to seeing images of Trump, oh I don’t know, letting himself be baptized by his personal spiritual leader. Would it be possible just to see how far this madness can go? Maybe someone needs to offer White-Cain 30 pieces of silver.