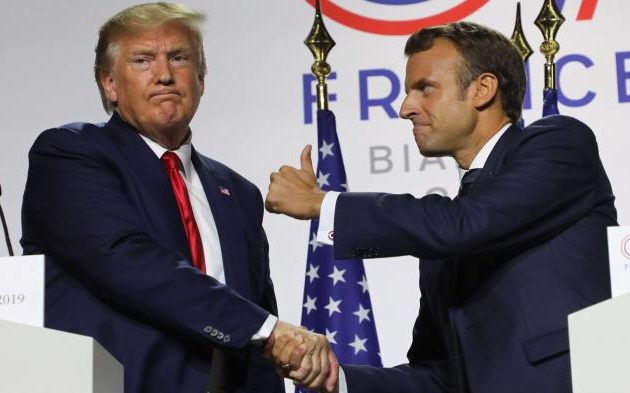 The American position on the Paris climate agreement is nothing new, as withdrawal was one of Donald Trump’s campaign promises in 2016. Trump rejected this commitment to reduce greenhouse gas emissions with its goal of limiting climate change and the accompanying threats to global peace and security, because of the potential effects on American industry, and thus the economy. The economy is a big priority for the current administration, and it has already achieved high economic growth rates compared to the previous administration.

But besides this stated goal, Trump has other goals in mind with this step. This is especially clear from the timing of the announcement, which coincides with French President Emmanuel Macron’s visit to China on a mission where he seems to represent not just France but all of Europe in his effort to find new partners, especially trade partners. This has become a priority in light of the trade war that has flared between China and the U.S. for months, and as France seeks to expand its global influence.

Here, we find a close link between the American withdrawal on one side, and on the other, both France, whose capital Paris gave its name to the climate agreement, and China, which has become a massive economic power. Indeed, China has become a nightmare for the U.S. as the trade balance between the two countries has shifted in favor of Beijing. Washington and its allies have spent the past few years accusing China of failing to comply with environmental standards, which China has justified based on its status as a developing country, working to achieve economic growth.

Therefore, the timing of the U.S. withdrawal was carefully researched. It is a message from the U.S. to its French allies and Chinese enemies, during their meeting in Beijing, that Washington can still ruin any potential deal, especially since the American exit is considered a “clinical death” for the agreement and deprives it of much of its legitimacy.

Perhaps the association of the climate agreement with the city of Paris grants some measure of influence to France and its president, who is seeking more international glory. Thus, the Americans’ decision is a sort of edict, depriving Macron of this honor. This is in line with their disruption of Macron’s attempts to play a role on the international stage, most prominently as a potential mediator between Washington and Tehran. Trump refused to give France a role, preferring instead that Japan mediate. Iran complied, first by sending its foreign minister to Tokyo and then with Iranian Supreme Leader Ali Khamenei’s attacking the French president as “naïve” for his desire to restore dialogue between the two countries.

It appears that the American withdrawal from the Paris climate agreement is part of a pattern of similar steps taken in different areas—such as the withdrawal from the nuclear agreement with Iran, and the Intermediate-Range Nuclear Forces Treaty with Russia, among others—in that Trump has shown an openness to renegotiating deals on new terms. This could happen with the climate agreement in the future, assuming that the terms which displease the U.S. change. Perhaps most importantly, the agreement may need to carry another name, far from France or Europe.