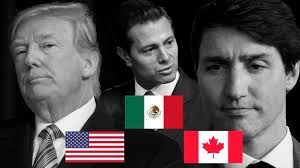 As I write, it does not seem very possible that the new trade treaty with the United States and Canada, known by the unfortunate name of USMCA, will be approved.*

It is well-known that Donald Trump initiated the renegotiation of NAFTA with the intention of reducing trade, which he doesn’t like, although the agreement had the potential to address many issues that didn’t exist during the 1992 negotiations but which are now relevant.

In the end, the agreement appears situated between two objectives: to bring provisions up to date and to put on the brakes. Canada and Mexico accepted the terms that were negotiated, although it remains clear that it will be more difficult to conduct trade in certain areas, specifically the automobile industry. I have the impression that this is precisely the issue that will most quickly become outdated because of the great transformation that the industry will be undergoing in the near future, but it is not possible to ask for too much given that Trump is involved.

The issue is that USMCA is stuck in the House of Representatives, which has a Democratic majority, and it is now mixed in with the impeachment inquiry, which House Speaker Nancy Pelosi formally launched yesterday. It is not easy to know how much impeachment proceedings will reduce or improve the prospects for the USMCA agreement.

On the other hand, AFL-CIO President Richard Trumka, who had assured people that the USMCA agreement would not be approved before Thanksgiving, has now raised several proposals that are unacceptable to Mexico, including the idea of verifying compliance with Mexican labor laws using United States inspectors working on Mexican soil.

The proposal to modify USMCA at the last moment is, in principle, an unacceptable tactic. The USMCA agreement was negotiated over many months, and its provisions should be approved or discarded without trying to obtain last-minute advantages. Nevertheless, that situation also occurred in 1993, when the United States managed to add a pair of agreements parallel to NAFTA (dealing with labor and the environment), in addition to concessions for specific representatives, in letters of intent or with additional accords. The current requests are greater, and for that reason, less likely to succeed.

We will know in a few days whether there will be a USMCA agreement or not. If it is not approved, we will continue with NAFTA, if Trump does not threaten to denounce it again. The United States is living through a period of conflict, and thus, I believe nothing should be considered impossible.

How does this affect us? Well, the approval of the USMCA agreement would establish a clear frame of reference, which should last for a number of years and facilitate business decisions. Without that, we remain in a state of limbo where NAFTA is in effect, but we don’t know for how long. Some industries see no deep differences between the two agreements, while others see disparity between the two agreements, as does the automobile industry, where the way of calculating the rules of origin is very different. Without the USMCA agreement, it remains in doubt whether changes will become effective, whether the agreement will be renegotiated under a different president, or whether NAFTA itself will be up for debate.

It is possible that the adoption of the USMCA agreement will facilitate a greater flow of foreign investment, but I wouldn’t expect it to be very significant. The most important impact, it seems to me, will start in 2021, and there is a way to go before then. I believe it is inappropriate for Mexico to insist that the USMCA agreement will improve economic conditions. It is true that it will be of some help, but not that much.

So, with or without the USMCA agreement, the coming year will be complicated. The manufacturing industry in the U.S. continues to decline, we have not seen investment in our country recover, oil production has not increased, and the service sector has lost the momentum it had in previous years. I don’t doubt that the Mexican government will blame the lack of the USMCA agreement for the poor start our economy will have in 2020. But don’t be fooled.

*Editor’s note: The USMCA, or the United States-Mexico-Canada Agreement, an amended version of the new North American trade deal, was signed on Dec. 10, 2019.