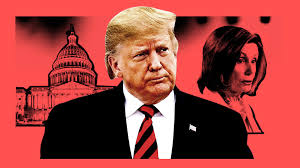 It was a historic vote that resisted feeling historical, we wrote in this newspaper last week. And yet: Donald Trump got impeached as president of the United States in the House of Representatives this Wednesday, and that impeachment will go down in history no matter what. That such a stain on his presidency does not sit well with Trump is evident from the barrage of tweets and verbal tirades he has sent into the world recently about the injustice done to him.

And so now we stand on the smoldering ruins of this political fight, with the big question: what has impeachment produced? In any case, it has not produced Trump’s resignation. He will be exonerated in the Senate by members of his party who hold a majority there (although not in the House).

What we do have is the most striking evidence so far that the American political landscape is deeply split. The nation is divided into two clans of approximately the same size, and almost no event or fact has persuaded anyone to go from one side to the other (even though there is one Democratic representative who did exactly that). This division applies to the people and to politics: the vote in the House proceeded almost fully along party lines, and it will not be any different in the Senate. This tribal behavior and the blurring of the separation of powers were reinforced yet again by the Republican Senate majority leader, who reported that the impeachment procedures had already been fully discussed with the White House.

For that matter, we can only mourn that it has come to this in the United States. And because such partisanship has been and remains well known, one could criticize the Democrats for setting this empty procedure in motion regardless. The Republicans can now (and not completely wrongly) say that “their” president is the victim of a political process, prompted by the overall dislike the Democrats have of Trump. Why should we not have waited until next November, when American voters could voice their opinion of the president?

But then one would be completing ignoring the events that are at the root of the impeachment. It is more or less certain that Trump tried to bribe another country for his personal political gain. That is an attack on American democracy. And the fact that this has not gone unnoticed is something we can now at least read about in the history books.