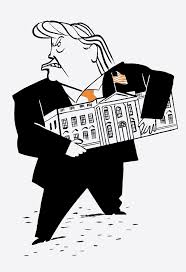 Some days ago, a small set of decision-makers were sitting together at the dinner table in an Arab capital. One of them asked, “What is the U.S. administration’s position regarding the calamities happening in our region right now?”

Silence fell over them all. Each individual began to think about his own honest response to the question.

Everyone already knew that a truthful response regarding the role of Washington and President Donald Trump in current events would be cause for absolute political depression!

At this juncture, any American president would be ultimately focused on domestic affairs in order to win his voters’ approval, bring new constituencies over to his side, ensure that his electoral base heads to the polls, secure financial support and mobilize volunteers for the presidential battle.

No American president would concern himself with foreign policy during this period unless such interference would serve his electoral base. This means that if Trump approached Mexico right now, it would be an attempt to court the Latino vote, or if he were to grant Israel the right to annex settlements in the West Bank, this would be a “bribe” for the votes of Zionist Jews, and so forth.

This would be the case for any U.S. president under normal circumstances, without the Democratic Party threatening political isolation as is now the situation for President Trump.

Trump is facing charges because of allegations he pressured Ukraine to authorize an investigation into his political rival Joe Biden, and that he attempted to obstruct justice and the Congressional investigation.

In order to actually remove the sitting U.S. president, the U.S. Constitution clearly provides that Congress conduct a trial. Trump’s trial may begin early next January, according to Senate Majority Leader Mitch McConnell.

Now, Trump is preoccupied with four issues: (1) impeachment proceedings; (2) ensuring a strong base among supporters including Republican senators led by McConnell; (3) finalizing and securing the required financing for his presidential campaign; and (4) searching for successful individuals either at home or abroad whom he can rely on for the great political marketing campaign which he depends on to pursue his populist policy.

Certainly, Trump is bothered by North Korea’s continued ballistic missile operations and China’s ongoing challenges to his trade policies. He is also troubled by turmoil in Iraq and Lebanon, the rise of Russian influence in the region and Recep Tayyip Erdogan’s continued follies from Iraq to Syria and from Greece to Libya.

All of that is important, but in the sphere of Trump’s concerns right now, these are not top priorities in his daily political efforts.

From now until November 2020, the American president will not utter a single word, sign any resolution, travel abroad or hold any domestic conferences unless they directly serve his reelection campaign. Everything else can go to hell!

Secretary of State Mike Pompeo at the State Department and Defense Secretary Mark Esper at the Pentagon are simply trying to keep the gears turning, but ineffectively and without any final resolutions.

So all we see is the Defense Department tracking Turkish movements in the Mediterranean with great concern and the Turkish minister of defense trying to clarify the significance of the Turkish president’s threats to end activities at the Incirlik air base.

For all that, we see Pompeo making anxious statements about what is happening in the streets of Iraq and Iran, and sending emissaries to Beirut to assess the dimensions of the Lebanese crisis.

Right now, the American effort is superficial and formal. America’s activities are being postponed until the next U.S. presidential administration is decided.

In conclusion, what do we do about local flare-ups that the leader of the most important country in the world has missed?

At first glance, it may seem that this poses a great danger. But in reality, this could be a great blessing that makes us mature politically and strategically wean ourselves from constantly resorting to Mama America when we have problems.

It is high time that reasonable powers in the Arab world and the eastern Mediterranean look to an alliance of moderation to protect the interests of the region against the three destructive undertakings coming from Ottoman Turkey, Persian Iran and Zionist Israel.

During this tight and short time from now until November 2020, we must build and develop our own capabilities. After that, we can say let’s take a break, and then we’ll continue!