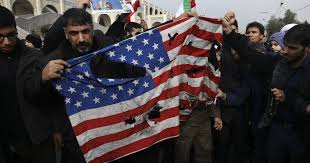 The chaos of Donald Trump’s presidency continues to be intolerable.

This time, Trump has actually carried out one of his threats. His military response, the liquidation of Iranian Gen. Qassem Soleimani in Iraqi territory, could not have been more energetic. Tehran assumed immediately that the action was an authentic act of war, as did Washington, where numerous Democratic legislators pointed out that there was no debate or authorization from Congress for a decision of such magnitude.

No one can doubt that Soleimani, a general in the Revolutionary Guard, was responsible for many attacks, killings and military actions in which American and allied citizens and soldiers have lost their lives. The deposed general was Ayatollah Ali Khamenei’s right hand man in both military and diplomatic matters and was the supreme director of Iranian intervention in favor of Bashar Assad in the war in Syria. He coordinated with Lebanese Shiite group Hezbollah and with Shiite organizations in Iraq. However, he was also responsible for the effective role he played with Shiite militias in defeating the self-styled Islamic State, installed in Syria and Iraq since at least 2014, in some cases, including coordinating more or less explicitly with the U.S. military.

The initial spark of conflict started with a missile attack close to Kirkuk, claiming the life of an American contractor. Washington responded with an even deadlier attack against the Shiite Iraqi guerrillas, who in turn decided to send militants to attack the American Embassy in Baghdad. These incidents, so damaging for relations between the governments of Baghdad and Washington, were in line with growing tensions after Donald Trump’s unilateral rupture of the nuclear pact with Iran and the reimposition of severe commercial and financial sanctions on the Iranian regime. Although previously, the Iranian attacks on oil fields in the Gulf of Oman and an oil refinery in Saudi Arabia went unanswered, this late overreaction is a highly dangerous move that compromises allies, and creates an unnecessary risk of war that could take on disturbing dimensions both in the region and also in the EU.

Right in the middle of an election year, and as usual, without consulting his European allies, Trump has decided to put on his commander-in-chief hat. Until now he has seemed allergic to military intervention and always hesitated when it came to executing his threats. But this time, he made the decision in the middle of an impeachment process, with a White House that has deserted the military, with a Secret Service and diplomats wounded by continued presidential mistreatment, and all at a time of maximum domestic and international lack of trust in Trump’s capacity to lead. The chaos of this presidency continues to be intolerable.