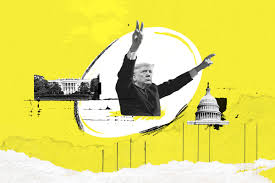 Donald Trump will not be impeached. The Republicans will ensure that the trial unfolding in the Senate is concluded quickly. But don’t forget the symbolism. It is powerful.

In the United States, the impeachment trial beginning this Tuesday in the Senate is, dare we say it, a sham. An expedited trial, probably without witnesses, where the accused already knows he will be acquitted, protected by his own regardless of the gravity of his deeds? The exercise is bound to feel frustrating, even useless. It is, however, necessary.

Two charges have been leveled against Donald Trump – abuse of power and obstruction of Congress – for having led a pressure campaign against his Ukrainian counterpart Volodymyr Zelenskiy with the goal of harming a political rival, Democrat Joe Biden. Sixty-seven out of 100 senators would have to vote in favor of removing Trump from office. Democrats only hold 47 seats, and Republicans are remaining loyal to their president. Simply put, the die is cast. Trump will not be removed. For suspense, kindly look elsewhere.

Naturally, the exercise appears to be in vain. And the Republicans’ blind support for Trump raises questions about the health of American democracy. Senate Majority Leader Mitch McConnell, has not, for that matter, hidden it: He wants to proceed very quickly. The trial could be wrapped up in two weeks, compared to five weeks for Bill Clinton in 1999 and three months for Andrew Johnson in 1868.

We must not, however, underestimate the importance of this sham trial. The moment remains historic, and the symbolism, powerful. Trump is the first American president under impeachment to set his sights on reelection. Democrats are well aware that the trial will not be impartial, and worse, that the process could even harm them. But they have decided to take these risks and act out of their “moral duty,” because the actions that drove them to initiate impeachment proceedings are serious. Trump is accused of turning to foreign powers to advance his reelection, something far more problematic than what Bill Clinton was accused of.

Trump may well be protected by his own and seek to redefine presidential powers, and this time he will definitely make it into the history books. Just not in the way he hoped. This trial will mark his presidency with a hot iron, regardless of the verdict or the Republican strategy to hide the gravity of his deeds.