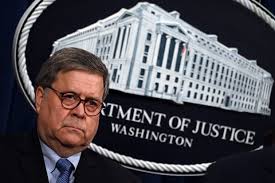 The American president is blatantly interfering in an ongoing court case. He does not consider himself bound by the law or by conventions – certainly not after his acquittal in the impeachment trial.

They are words that should logically be followed by a resignation. In an interview, Attorney General William Barr accused President Donald Trump, with his Twitter tirades, of making it impossible for him to do his job. He was not only referring to how the president had lashed out against the judicial system after lawyers demanded a harsh sentence for Trump’s former campaign assistant and confidant Roger Stone. Barr was explicitly talking about presidential interference in ongoing court cases and attacks on judges in general, which cast doubt on the integrity of the judicial system. It is time for this to stop, Barr said. No member of the administration has ever criticized the president so clearly, and the president reacted sensitively, as expected. Trump tweeted that as president he has the right to give instructions on legal cases; he had just refrained from doing so until now.

That is hard to believe. Shortly after the president complained about a “horrible … miscarriage of justice” against Stone, the Department of Justice recommended a notably milder penalty. The four prosecutors in charge resigned after this unusual development. Subsequently, Trump praised Barr for having taken care of the issue. Restraint out of respect for the authority of law enforcement agencies sounds different.

The attorney general denies that he acted at the president’s behest. He stated that Trump never asked him to intervene in a case; rather, he had already concluded that the recommended penalty was too severe before Trump’s outburst. This timeline is conceivable. Up to nine years in prison for someone with no prior offenses and who did not commit a violent crime seems unreasonable, although this range of punishment corresponded with sentencing guidelines, given that Stone intimidated witnesses.

But even if Barr acted on his own initiative, the effect of Trump’s tweet is devastating, because it creates the impression that the attorney general was heeding the White House’s call. That undermines trust in the judiciary and in the principle that friends of the president should be treated just like everyone else in court. It differentiates liberal democracies from authoritarian systems. Trump’s behavior is even more disturbing given that he can already exercise widespread influence on court rulings with his right to pardon, but only after sentencing, not before.

Since Richard Nixon’s Watergate scandal, it has become an iron-clad rule that American presidents do not give even the faintest impression of interfering in judicial affairs. Trump has flouted this practice since his first day in office; one only has to think of all the crimes which he has accused his political opponents of committing. The president regularly communicates that he does not consider himself bound by the law or by convention. His acquittal in the impeachment process has confirmed his perspective. Just a week after the Senate’s verdict, the president first took revenge against the government officials who had testified before Congress, and then he tried to save his friend from going to jail. There is no indication that he might temper his effort to abuse power. On the contrary. Trump has willing helpers in this effort, like his loyal and devoted party, or even Attorney General Barr, who despite his criticism, continues to serve him faithfully.