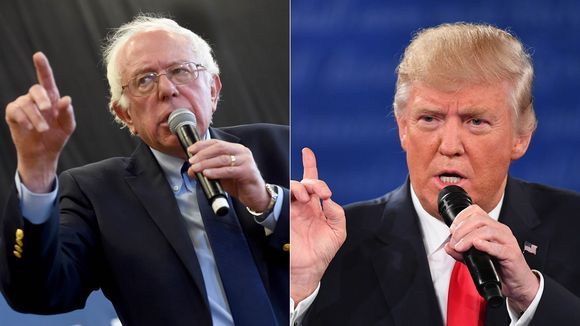 Bernie Sanders has a good chance of becoming the Democratic presidential nominee. But the angry 78-year-old senator is much more similar to the man in the White House than many believe. The same goes for the worldview of his followers.

This year, the Democrats in the U.S. really have just one task central to American democracy: preventing the reelection of Donald Trump. This is necessary both to avoid him causing even greater damage to institutional norms in the U.S. and completely living out his authoritarian tendencies, and to prevent Trump from further eroding America’s role as a global leader and perhaps even questioning the entire Western alliance in the coming years.

But the Democrats’ mission is now at risk of failing. A clear shift to the left has meant that Bernie Sanders now leads in the primaries and actually has a chance to be nominated as the presidential candidate of the Democratic Party.

That is in part because voters are arguing about a series of moderate candidates, and no candidate has been able to clearly assert himself or herself as the representative of the moderate camp.

Moreover, Sanders has the advantage of effective campaign organizing and well stocked funding, as well as a name that is well known by now, presumably due to his surprisingly strong run against Hillary Clinton four years ago.

The potential of a Sanders’ victory in the primaries makes many moderate Democrats, as well as many independent voters and Republicans critical of Trump, break out in a cold sweat — because if the left-wing Sanders, who describes himself as a socialist, becomes the Democratic candidate, Trump’s reelection becomes much more likely.

It is no wonder that even Russia is trying to influence events in his favor, as U.S. intelligence agencies have determined, because in Moscow, too, reelection of the Russia-friendly Trump is considered most probable if he is running against Sanders. The Democrats are thus in the process of botching their most important task.

In fact, the Democratic Party is experiencing its own Trump moment. In the 2016 Republican primaries, conservative voters didn’t seem to care who had the best chances at election. (One can recall that even Team Trump did not believe it would win on election day and only won because Clinton was such a problematic candidate with many inherited legacies.)

Instead, Trump voters cared much more about giving the finger to the establishment of their own party — and to elites in Washington. Something similar seems to be happening on the left four years later. Sanders is not the candidate with the best chance of defeating Trump. But he still leads after the first state primaries.

This is because many Democratic voters are also fed up with “the elites” in their own party and in the country, and because raving Bernie most authentically embodies this anger and is best able to channel it.

Sanders and Trump Are United by Their Lack of Humor

There are many similarities between the Trump and Sanders phenomena — for instance, that they do not treat numbers and facts very carefully. Trump once pompously announced significant tax incentives without ever satisfactorily explaining how these could be financed. Now, after the tax incentives have been established, the U.S. is heading into a debt trap, despite its strong economic activity, because all that does not pay for itself, after all.

What were tax incentives to Trump are promises of comprehensive welfare programs to Sanders, programs which the socialist has yet to answer questions about how they will be paid for. Not even a majority of Democrats wants to establish the mandatory health care program that Sanders imagines, a system which would be even more federally concentrated than the German health system, for instance, and would eliminate all private insurers.

Trump and Sanders also share a humorlessness and inability to take an ironic step back from themselves. Whoever has experienced Sanders live quickly realizes that Bernie very much has demagogic talents, just like Trump.

When he delivers his champion-of-the-people style diatribes against the “millionaires and billionaires,” who are collectively supposed to be only causing problems, it demonstrates the kind of group-oriented hatred reminiscent of Trump’s anti-Hispanic tirades. It’s only that most wealthy people are better able to defend themselves than are Hispanic immigrants.

Sanders is a left-wing ideologue who has always remained isolated as a senator because he has no interest in seeking compromise and building coalitions to a pragmatic effect. Just how far he is from moderate and electable positions is clear in the videos now surfacing of him, some decades old, in which he defends the communist regime in Cuba, or the Sandinistas in Nicaragua, or praises the Soviet Union.

Sanders has been a lifelong leftist anti-imperialist who has rejected America’s leadership role in the free world and harbors sympathy for left-wing authoritarian regimes antagonistic to the West. In this respect, he resembles British Labour Party leader Jeremy Corbyn, who, after multiple electoral defeats, finally had to step down.

Sanders’ recent attacks on the pro-Israeli lobby, the American Israel Public Affairs Committee, can only be shared among his left-wing milieu at most. The Republican lines of attack against Sanders as a candidate are thus presenting themselves. Trump could hardly wish himself a better opponent.

If Sanders does manage to become the Democratic presidential candidate, it could mean a second term for Trump. But Sanders’ followers do not care; their anger at the establishment is greater than their desire to prevent Trump II.

That reflects a zeitgeist that is widespread in Western countries today. We are living in societies that, in many respects, are driven by effect and in which expression of personal inclination is often more important than the big picture.

Who cares about a historic mission if he or she can for a moment experience the satisfaction of having given those up there an earful? Hatred of elites is the fuel that drives Trump followers through today — and which also largely motivates the Sanders phenomenon.