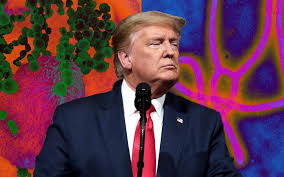 With the novel coronavirus spreading across the world, the World Health Organization announced that it is now a global pandemic. To counter the pandemic, President Donald Trump immediately announced a ban on air travel from the European Union to the U.S. for 30 days. He also proposed plans for a bailout. However, investors did not highly regard the move, and the Dow Jones Index slumped 2,352 points on March 12, a drop of nearly 10% and the worst decrease since 1987, prompting a global stock market crash. An economic recession triggered by the coronavirus has become Trump’s biggest test as he seeks reelection.

The coronavirus is very infectious. In just three months, it has spread to 114 countries. Over the past two weeks, the number of confirmed cases outside of Mainland China has increased thirteenfold, and the number of deaths has doubled. President Trump and Vice President Mike Pence recently met with Brazilian President Jair Bolsonaro’s press secretary, who tested positive for the virus, creating concern. Canadian Prime Minister Justin Trudeau’s wife also tested positive, which led the couple to self-isolate.

Initially, Trump seemed unconcerned about the coronavirus and repeatedly made mistaken and misleading statements about the situation, which the American media reviewed and corrected one by one. Obviously, either Trump did not understand the coronavirus situation, or his staff did not provide him with complete information.

As the coronavirus bears down, the resilience of each country’s government is being tested. The U.S. is the leader of the global economy, and Trump has confidently expressed that it has the most advanced medical equipment. Further, he said that the public can get tested anytime, and called on people not to be too worried. However, Anthony Fauci, director of the National Institute of Allergy and Infectious Diseases at the National Institutes of Health, admitted at a press conference that testing kits in the U.S were inadequate, a major failure. The public really cannot receive testing anytime.

Since Trump overturned President Barack Obama’s health care law after he came into office, nearly 3 million people have been without health insurance. Most of these people are middle to low-income earners. If they are infected with the coronavirus, without the support of health insurance, they won’t seek treatment, instead continuing to move about their communities and thereby creating the biggest gap in pandemic prevention. Before he was elected, Trump said he would take care of the people who have been forgotten. However, his actions since taking office have only hurt the interests of these people. The onslaught of the coronavirus is just one more disaster piled on another for people without health insurance.

Recent clusters of coronavirus infections at U.S. community senior centers indicate that the virus has already taken root. Medical personnel are worried that medical resources at community hospitals, such as protective clothing, masks and intensive care units, are insufficient. If there is a sudden large-scale outbreak, the hospitals won’t be able to handle a flood of thousands of people.

The attending physician of the U.S. Congress estimates that 70 million to 150 million people in America could be infected. Everyone should mentally prepare and take care of their health. As early screening is central to pandemic prevention, if testing kits are insufficient, detecting the virus through screening will be impossible, creating a gap in pandemic prevention. If more than 70 million people are infected, regional hospitals will be overburdened. The situation is extremely urgent. And Trump is responsible for providing the necessary protection to people who have been forgotten and have no health insurance.

Only by understanding the coronavirus can humans win the fight against it. As the pandemic continues to spread, all walks of life are being affected. Everyone must change their ways of doing things to try and prevent invasion by the virus. According to each country’s pandemic prevention experience, advanced planning by governments can effectively slow the spread of the virus. The coronavirus will be a huge test for Trump’s reelection. Instead of blaming others, he should act – better late than never – and strengthen America’s medical response system.