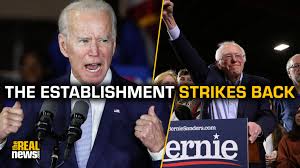 The war waged by the traditional wing of the Democratic Party against Bernie Sanders − before the Super Tuesday primaries − worked.

All the contenders, except for Joe Biden, stepped down, and the majority − even some who had dropped out before Tuesday − have supported his candidacy. Yesterday, the former vice president accumulated wins and delegates.

Biden has also benefited from Sanders’ lack of connection with the African American electorate − especially among adults and seniors − and from accusations by other candidates of Sanders’ alleged love for the Soviets and for Fidel Castro’s Cuba. Yes, that was also part of the current conversation.

To be generous, Sanders has had a tough time, and he has not reacted in the best way by blaming the “corporate” media and, of course, the Democratic establishment. He has recently commented more than once about something that is common everywhere: Young people go to rallies and demonstrations, they express themselves vigorously on social networks, but when it comes to casting a vote in a ballot box, they often have something else to do that day.

Biden as candidate facing off against Donald Trump promises, above all, a unique political spectacle between now and November.

Keep in mind that the impeachment proceedings against Trump were precisely for allegedly demanding information from the Ukrainian government and for action against Biden’s son. Those allegations of corruption − and accusations against Biden, himself as vice president for having favored his son − have never been proven.

Doubtless, there will be fireworks during the campaign. Imagine the debates. I do wonder about a few things, though: Is Biden the ideal candidate to beat Trump? His debate performances ranged from fair to poor. In more than one event, he seemed noticeably confused and unclear. He is not, let’s say, a man who generates enthusiasm. Nor does he seem to have many proposals, beyond anti-Trumpism. And he has a history: Barack Obama’s eight years, whether they are distorted or not, will be used as a weapon against him.

And what will the considerable number of Sanders fans do? Will they stay home? Didn’t we already see that movie with Hillary Clinton?

About Patricia Simoni 108 Articles
I first edited and translated for Watching America from 2009 through 2011, recently returning and rediscovering the pleasure of working with dedicated translators and editors. Latin America is of special interest to me. In the mid-60’s, I was a Peace Corps volunteer in Chile, and later lived for three years in Mexico, in the states of Oaxaca and Michoacán and in Mexico City. During those years, my work included interviewing in anthropology research, teaching at a bilingual school in the federal district, and conducting workshops in home nursing care for disadvantaged inner city women. I earned a BS degree from Wagner College, masters and doctoral degrees from WVU, and was a faculty member of the WVU School of Nursing for 27 years. In that position, I coordinated a two-year federal grant (FIPSE) at WVU for an exchange of nursing students with the University of Guanajuato, Mexico. Presently a retiree, I live in Morgantown, West Virginia, where I enjoy traditional Appalachian fiddling with friends. Working toward the mission of WA, to help those in the U.S. see ourselves as others see us, gives me a sense of purpose.