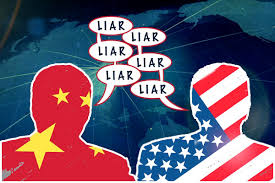 In the past few weeks, the United States and China have been fighting a unique war. Rather than resorting to missiles and canons, the two superpowers have taken up another weapon: media propaganda. To be clear, this is nothing new. The key figures that walk the global stage have always tried to control the factual narrative of a given historical period by disseminating specific ideas and information. When it became obvious that propaganda could be more powerful than bullets, many governments put special structures in place to facilitate the use of persuasion to reach specific goals. Goals destined, in turn, to benefit those who organized the whole process.

The propaganda war is no longer fought with flyers and posters, party newspapers and publishing houses. Today, the battlefield has moved online and, more specifically, onto social media. From Facebook to Twitter, TikTok to WeChat: this is the new ground that the superpowers compete for in a no-holds-barred tug-of-war. The stakes are very high. Conquering these spaces allows global players to influence users, to bring them onside, to mobilize public opinion against the opposition, to improve their international image and, most importantly, to strengthen their power.

The secret to their success lies in convincing others to adopt their goals, appealing to their audience via a series of intangible resources such as culture and values. This brings us to the concept of “soft power,” coined by Joseph Nye, a concept which holds center stage in the ongoing U.S. – China propaganda war.

The Claws of the Dragon

Let’s start with the “Dragon,” and the tools by which Xi Jinping responds, blow for blow, to Washington’s attacks. Since 2009, as Foreign Policy reports, China has spent at least $6.6 billion to promote its worldview beyond the wall. This huge amount of money has been concentrated in various publishing products, in English, but also in other languages. The policy behind Beijing’s modus operandi is exemplified in President Xi’s declaration in 2016: “Wherever the readers are, wherever the viewers are, that is where propaganda reports must extend their tentacles.”

Before going into detail, we must first consider the concept of propaganda. From a lexical point of view, the term has always had negative connotations in the West, connected with the intention to transmit misleading information. In China, propaganda implies the use of communication to transmit a specific message or idea that reflects the government’s view. To return to the tools used by Beijing, excluding dailies printed in English, it’s worth tuning into TV and radio programs. One of China’s most effective attempts to increase the informative weight of its worldview was the act of combining China Global Television Network with China Radio International and China National Radio. The three strands were merged into Voice of China.

Calculator in hand, Chinese media broadcast in at least 140 countries and 65 different languages, and boasts a strong presence on social media and western platforms from Facebook to YouTube via Twitter. The New York Times recently shed light on the case of CGTN in the U.S. The channel in question is controlled by CCTV, the Chinese State broadcaster based in Beijing. It broadcasts in English and, its programs are estimated to reach the homes of 30 million American families. Washington has lamented CTGN’s ability to influence public opinion in the U.S. by conveying an incorrect representation of China.

Between Soft Power and Propaganda

It was inevitable that the focus would fall on the COVID-19 pandemic. The U.S. is pointing the finger at China and accusing Beijing of being solely responsible for the health and economic disaster sweeping around the world. The U.S. has leveled numerous accusations at the Chinese Communist Party: concealing the epidemic in its initial phases, hiding the true origin of the virus (The Washington Post theorizes that the pathogen may have escaped from a laboratory), silencing doctors planning to sound the alarm, belatedly admitting the existence of a severe epidemic and, last but not least, covering up the real number of dead and infected patients.

Speculation from the White House – currently just theories, not yet confirmed by fact – has driven China to respond in kind. Through its agencies and news outlets, the Asian superpower has repeatedly rejected the accusations, denouncing Washington’s show trial as irresponsible and inappropriate. Zhao Lijian, spokesperson and vice director of information in the Chinese Ministry of Foreign Affairs, used footage of a speech by Robert Redfield, addressed to a Congressional committee, to place the blame with the U.S.

“Redfield (Director of the US Centers for Disease Control and Prevention) admitted some Americans who seemingly died from influenza tested positive for the novel coronavirus,” Zhao tweeted. “When did patient zero begin in US? How many people are infected? What are the names of the hospitals? It might be US army who brought the epidemic to Wuhan. Be transparent! Make public your data! US owe us an explanation!” [https://twitter.com/zlj517/status/1238110160884625409, https://twitter.com/zlj517/status/1238111898828066823] The American accusation, then, has been reversed.

Before the American media could launch a counterattack, China had been able to curry favor with many countries. How? By appearing ready to help “friends” and providing medical supplies to nations overwhelmed by COVID-19. Images of freighters arriving from the Far East, full of facemasks, ventilators and doctors, have prompted a large proportion of the global population to suspend negative judgement about Beijing’s alleged negligence. Now, American investigations are threatening to disrupt the Chinese narrative. And the Dragon could launch a fresh counter-offensive.

The U. and Anti-Chinese Propaganda about the New Coronavirus

The U.S. seems intent on holding China accountable. In reality, there are conflicting signals coming from Washington. During the initial phases of the pandemic, Trump publicly declared his appreciation of Xi’s efforts in relation to the measures introduced by the People’s Republic of China to prevent the global spread of infection.

The U.S. president has also telephoned the Chinese leader in recent weeks with the aim of cooperating. But since the beginning, the theory attributing sole responsibility for COVID-19 to China, even disregarding how the new coronavirus originated, has gained traction in the U.S. It seems that the stage is set for a new cold war. But there are many factors involved. And it would be pointless to make unfounded predictions.

As we’ve said, propaganda is a concept that can be interpreted in many ways. Until proven otherwise, the U.S. is in search of the truth regarding COVID-19 – provided that Beijing’s version of events is flawed, as Washington seems to suspect. In political science, the concept of negativity often comes up. A quick look at the comments on American social media profiles is enough to tell you that at least a portion of American citizens do not believe China’s version of events. It could be a marginal slice of the population, or more. At the moment, it’s hard to tell. What is certain is that news networks are happy to broadcast none too positive reports on China’s alleged lack of transparency. This comes down to the inflation of the concept of negativity. Professor Thomas Patterson, who teaches at Harvard, outlined the extent of this phenomenon when he wrote about negativity in the context of the 2016 American election.

Let’s face it; in his latest campaign ad, even Democratic presidential candidate Joe Biden scolded Trump for the lack of clarity on his attitude toward China. The criticism stems from a simple assumption: the real estate tycoon has expressed a series of contrasting opinions on China. And for Biden, Trump is handling the situation in an unacceptably chaotic manner. This is campaign propaganda. But that’s a different story.

To lead with a simple fact, Trump does not call it ‘COVID-19. Not always, at least. The term used by the Republican leader to identify the new coronavirus is “Chinese virus.” And the commander in chief has also explained why to the press, claiming that he uses the term “Chinese virus” because, plainly, the virus sweeping the world comes from China. But this attitude could have consequences on a geopolitical level.

The Whole US Propaganda Narrative Focuses on the Laboratory in Wuhan

The U.S. media need little introduction. In recent days, however, some of the key outlets – be they written or televised – are becoming aligned, from CNN to Fox News to The Washington Post, the question posed is more or less the same.

The question concerns a series of eventualities. Has the Wuhan laboratory, not far from the wet market where the pandemic would have originated, always respected security measures? Why do some, including French Nobel Prize winner Luc Montanger, suspect that the virus was leaked as a result of some error? And then, is it possible that Chinese scientists made a mistake while studying coronaviruses? Some, especially among the free agents, have come to theorize that some Wuhan researcher may have been infected first.

This is still not enough. There’s a further minefield. In the United States, there are questions as to whether China gave fair warning of the risks arising from COVID-19. And the World Health Organization – which Donald Trump has cut off funding to – also plays a role in the story. Maybe the origin of COVID-19 will never be clarified. And the reason is simple: once the nature of the genome is identified, it can always be argued that the scientists could have mixed other natural pathogens. This has been explained using the example of apples: in mixing two varieties of apple, you get a natural but still manipulated result.

But we won’t focus on this for now; what’s important is that the U.S. reaction, from a propagandist point of view, to the theory that COVID-19 was indeed transmitted by a bat to an animal reservoir and then to humans, should perhaps be taken with a pinch of salt. And that we should not ignore Trump’s declaration that the U.S. would respond in the event that China had concealed any details.

Is the American narrative just propaganda? It’s impossible to define. Time must take its course. What we know now relates to an investigation announced by Secretary of State Mike Pompeo. Trump, too, has made it clear that the U.S. is working to find out more. Whatever happened, it is worth noting that the United States, especially Trumpists and Republicans, are sowing the seeds of the November election; accusing China of being solely responsible for the pandemic could work to Trump’s advantage. The Democrats, if nothing else, have closer ties to the Dragon. Biden will have some difficulty blaming China for COVID-19. Trump, not so much.

About Laura Hutchison 5 Articles
Laura Hutchison lives in Oxford, UK and works as a freelance copywriter for branding and marketing. She speaks Italian and French and is excited to be part of Watching America's translation team.