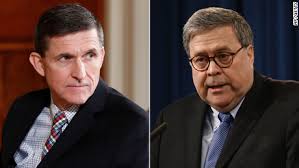 If there is one place where the U.S. president has lots of ideas, it’s justice. While we tear our hearts out over the dissertations on his self-interested and partisan handling of the coronavirus crisis, the man and his gang are methodically continuing the work of derailing the U.S. judicial system. The goal of these maneuvers: construct a wall of complete impunity around this president by cementing the support of his base, especially the white evangelical voters, with an eye toward the coming Nov. 3 presidential election.

Thus, last Thursday,* the Department of Justice, and specifically Attorney General William Barr, recommended dropping the criminal charges against Michael Flynn, who was briefly President Donald Trump’s national security advisor before having to resign in February 2017 in connection with the scandal of Russian interference in the 2016 presidential election.

In this complicated scandal, the Justice Department’s decision is as surprising as it is fraught with implications for the rule of law. It’s a turnaround that has rightly sent shivers down the spines of the American legal community. Surprising because, after all, Flynn had already pleaded guilty to charges of lying to FBI investigators; dropping the charges makes no sense in the exercise of justice. It raises serious consequences because it is part of the continuum of moves this president is making – and the ideological war he is waging – to maximize his power and avoid accountability for his actions.

Flynn agreed to cooperate with Special Counsel Robert Mueller in the Russia investigation. What he could or would have revealed has always made the president very nervous. It’s understandable that Trump was interested in erasing that possibility. But equally if not more disturbing in the eyes of many judges and prosecutors is the fact that in support of its decision to suddenly drop the charges, the Justice Department bozos cited a conspiracy theory that Flynn had basically been manipulated by FBI investigators. And they implied that this is once again proof that judicial inquiries into Russian interference are based solely on political motivations and that the “deep state” is at work against the American people.

Absolved in February in connection with the Ukraine affair after his acquittal by the majority-led Republican Senate, Trump hasn’t stopped affirming his legal “right” to “do whatever I want” as president. Neither he nor the FBI, however, is above the law. It cannot be said enough that Trump is the symptom of a country that is struggling with its democracy.

A great slayer of the Russia investigation, Barr is the armed proponent of this idea that the president is above it all. He is a believer in interpreting the Constitution to say that the president’s power is almost unlimited. An ultraconservative Catholic, Barr argued that the Founding Fathers saw religion as an essential element of democracy. He advocates for an ideological war against “secularism and moral relativism.” In accordance with his convictions, at the end of February, he came to the defense of economic and religious rights asserted by anti-confinement demonstrators who have taken to the streets in recent weeks.

This is actually the second time that Barr has done such a favor for his boss. Roger Stone, another close friend of the president’s who was also mixed up in the Russian shenanigans, saw his prison sentence conveniently reduced in February thanks to the Justice Department, to the dismay of the Democratic opposition.

There is the Trump who uses justice strictly for his personal ends, and then there’s the Trump who puts it under the thumb of his voters. Since coming into office, Trump has appointed dangerously conservative judges to the bench in record numbers: 133 to U.S. district courts, 50 to U.S. appellate courts, and two to the Supreme Court. There is no one who could improve the quality of justice thus burdened by his racist biases. Even the pandemic is serving his interests at certain moments: in recent weeks, using an obsolete quarantine law dating back to 1893, he has expelled more than 20,000 immigrants who arrived at the border.

The kindness done to Roger Stone caused an uproar. And the judge who is presiding over Flynn’s trial is hesitant to grant the motion to drop the charges. So much so that this will be a test of judicial independence. How can we block the way of this president and stop him in his tracks? We’ll never get there without a general mobilization of countervailing forces.

*Editor’s note: The U.S. Department of Justice recommended the dismissal of the criminal charges against Michael Flynn on May 7.