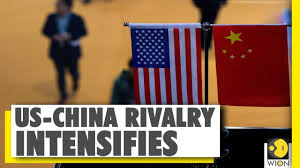 The coronavirus is leading to an escalation of the rivalry between the United States and China. Europe can steer clear of the madness by fervently defending its values.

A laboratory in Wuhan, a Missouri law, an acknowledgment from Rome, a censored sentence from Brussels − the rules of the new world order are currently being written in many different locations, but they are all subject to the same impetus: The coronavirus has mobilized world-shaking forces.

The geopolitical rivalry between China and the U.S. is in full swing; the strident battle for credibility, allegiance and responsibility has reached international politics. COVID-19 has not united the world; it is dividing it with hitherto unforeseeable consequences. One thing is certain: Neither the United States nor China will come out stronger from this crisis for mankind. Europe will become the plaything of the projections and neuroses of the two superpowers; the world will overall become more anarchic, volatile and less focused on survival issues like environmental protection and population growth.

The Chinese-American rivalry is increasingly getting out of control. Even a military showdown over the South China Sea or because of Taiwan cannot be ruled out. In the war of words, shots have already been fired. Contrary to the usual trend, the political assessment in the U.S. is unanimous: China, guilty of securing competitive advantages by applying unfair methods and creating dependencies all over the world, wants to turn the virus to its political advantage.

On the surface, the recriminations are about a lack of transparency and clarification. They are actually about economic, technological and systemic superiority. The “Chinese or Wuhan virus” becomes a metaphor, the laboratory in Wuhan a conspiratorial symbol. The accusations are hysterical, the allegations contradictory. And yet, Washington is demonstrating a rarely seen political solidarity.

Josh Hawley, a senator from Missouri, introduced a law that would allow Americans to seize Chinese property for indemnity claims. This may just be empty rhetoric, but the political will to “hold” China “accountable” for the pandemic is growing.

Beijing, on the other hand, has initiated a game of concealment and deception, accompanied by open threats. Explanation and communication are contradictory at best, but mostly just propaganda. An international investigation into the origins of this global disaster is being promised but not honored. Fiery warnings are sent around the world, from Australia to, of course, the United States. Diplomats are now referring to themselves as wolf warriors, in reference to a trivial shoot-’em-up film trilogy. The U.S. secretary of state is characterized as evil, insane and labeled the “common enemy of mankind.”

Neither China nor the United States will benefit from their behavior. Public opinion in many parts of the world has turned against them. China’s aggression and the search for a crude advantage in the shadow of the crisis have increased global distrust. Protectionist trade measures, the repatriation of strategic industries and the nationalization and regionalization of supply chains will define the next phase of economic policy.

With its feeble handling of the crisis, the United States has also lost allies and gambled away the remnants of its role model position. The supposedly most powerful nation in the world is not even capable of protecting its own people and is ruled by a president who is trying to fight the virus with voodoo magic. The allegations regarding the Wuhan laboratory also reveal a U.S. that no longer relies on truth being the most powerful weapon in international disputes.

Both nations, China and the U.S. alike, are displaying aggression that stems from inner weakness. When it comes to the U.S. president, the case is simple: Donald Trump is constructing a culprit to hide his own incompetence, for the election battle. What better scapegoat could there be? Already one hears, “China is killing our people.”

The leadership in Beijing has realized as well, that the actual threat is not coming from outside but from within. The [Chinese Communist] Party’s dominance is not in jeopardy and Party leader Xi Jinping remains untouchable. But the economic crash is dramatic, the level of debt is overwhelming, the shunning by the world is painful and the theatrical buildup toward the 100th anniversary of the party’s founding is collapsing. The political apparatus and the people are simmering; pamphlets critical of Xi are becoming public. The recipe to combat this: repression and propaganda.

The world cannot avoid this clash of the titans but is by no means powerless. This is particularly true for Europe and Germany, where political dizzy spells have increased at an alarming rate. In Italy, a majority sees China as the most important ally; Serbia has obviously surrendered; officials from Brussels let Beijing edit their texts. However, oaths of allegiance to Washington appear just as helpless. As if credibility could be earned by subscribing to Trump’s Wuhan package.

Albeit weak, Europe can still be a credible arbiter between the fronts. Germany and France, which set the tone, must act fast and make it clear that Trump stands alone with his extremism and that China will pay a great price for its unwillingness to cooperate and for its repressive policies. An economic disentanglement is unrealistic, but an adjustment aimed at reducing vulnerability and decrease in trade volume is inevitable. That will be costly.

At its core, however, this rivalry is about values and democracy, about freedom of opinion and human dignity, which is why Europe must set the standard in this situation. No expense can be spared.

About Lasse Christiansen 23 Articles
I am a translator and localization specialist who loves to work with languages and communication in all shapes and forms. I lived in Canada for several years and recently returned to my home country Germany. During my time abroad I was fortunate to have worked with several exciting, globally acting companies from different industries. I am passionate about what I do and am always looking for opportunities to expand my expertise.