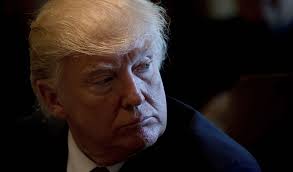 Donald Trump wants to remain president — but he no longer wants to present himself as a president; he wants to be an outsider again. Hence, he is calling for breaking off relations with China.

If Donald Trump’s followers took the American president at his word, they would have to feel that he had betrayed them. Because, as he himself has said, Trump has known for years about a trick for saving the United States $500 billion, year after year, but has not used it: a complete termination of (economic) relations with China.

Hence his response to the question during an interview on Thursday with Fox Business of how he wanted to hold China accountable for its supposedly exclusive responsibility for the coronavirus pandemic. Trump asserted, “There are many things we could do. You’d save $500 billion if you cut off the whole relationship.” And then he transitioned without much ado to another complaint, this one about the Europeans, who he said were scamming the U.S. out of similarly large sums through NATO and on trade.

On Fox Business, Trump did not have to fear the logical follow-up question of why he had not yet carried out this supposedly very lucrative and straightforward termination of relations with China. Not to mention that he could have been asked about the actual consequences for the global economy of the two largest powers cutting off relations in the middle of a pandemic. In Trump’s bubble, the president is still allowed, even in his fourth year in office, to talk as he did in 2015 and 2016, as an outsider candidate.

In the past few years, Trump’s interlocutors and trade partners have time and again been taken aback by the realization that he actually seems to believe the naïve assessment that trade deficits in the global economy are more or less equivalent to outstanding rental payments in the real estate business. But Trump clearly knows better. Otherwise, he would not have concluded with such aplomb a “deal” with Beijing back in January — a deal that boils down much more to continuity than to a radically transformed balance of American and Chinese interests.

Trump has now dismissed his plan to score campaign points with this success and is retreating to the role of the victim. “The ink was barely dry and the plague came over, and it doesn’t feel the same to me,” Trump said in the interview. He said that he is no longer in the mood to meet with President Xi Jinping, upon whom he had been lavishing praise until just recently. Meanwhile, Trump’s economic advisor, Peter Navarro, who is deeply anti-China and favorably disposed toward conspiracy theories, asserted in a Fox News interview that the virus most likely originated from a “weapons lab” in China, without providing any evidence for the claim.

Now that America’s economy is in a free fall because of the pandemic and respectable economists and epidemiologists are painting a dismal picture for the coming fall and winter, Trump no longer wants to be measured by his time in office. The president himself may bear as little responsibility for the devastation from the coronavirus as he deserved credit for the earlier economic upswing, after so many years of slow economic development. But he knows that many voters do not differentiate with such nuance.

For this reason, he is pinning his hopes on a repeat of his outsider campaigning from 2015 and 2016. He is already taking every opportunity on Twitter and in interviews to blame his country’s current suffering on Barack Obama and Hillary Clinton, in addition to China and the Europeans. The only ones missing, really, are the Mexicans — but there are still six months to go before the elections in November. Will Americans to the right of the political divide see through his clumsy game?