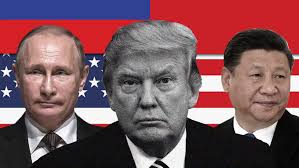 Secretary of State Mike Pompeo, the leader of the anti-Chinese camp, made two statements during a recent interview with the Washington Examiner. First, he threatened to build an international alliance that would impose costs on China for the damage caused by the novel coronavirus. Second, he wooed Russia by stating that collaboration between the U.S. and Russia is likely to be successful in efforts to combat the COVID-19 pandemic and terrorism.

A Russian news source pointed out clearly that the U.S. is putting on a friendly face in an attempt to woo Russia, so that it will join the U.S. in its effort to bash China. The U.S. is presuming that China is guilty, and initiating an investigation into the origin of the virus as it tries to draw certain countries to its side. Now, it is using Russia to pressure China.

With the continuous recent tension in the China-U.S. relationship, any minor activity within the China-Russia-U.S. triangle draws significant attention. On April 25, President Donald Trump and Russian President Vladimir Putin issued a joint statement commemorating the 75th anniversary of the meeting on the Elbe. The statement emphasized that the “Spirit of the Elbe” is an example of how the two countries put aside differences, built mutual trust, and cooperated in pursuit of a greater cause. On May 7, after a phone call between the two presidents, Trump asserted that the U.S. would help Russia fight the outbreak. He also said that now is the perfect opportunity to collaborate, and that the relationship between the two countries would improve. These activities have all triggered speculation within the international community.

Russia has already thrown a wet blanket on the Pompeo camp, which is counting on Russia to help it bash China. Kremlin spokesman Dmitry Peskov said on May 7 that there is some interaction between Russia and the U.S., but the aim of these interactions is to avoid unnecessary conflict. Peskov also said that the administration does not see the prospect of Russia-U.S. relations improving in the near future.

On the other hand, the comprehensive strategic partnership between China and Russia has continued at a high level. Both countries have criticized the U.S. for politicizing the outbreak. Russian Foreign Minister Sergey Lavrov said that the demands of certain countries that China pay reparations for damage caused by the COVID-19 pandemic are unacceptable, and that these demands make his “hair stand on end.” As for America’s demand that China participate in the nuclear arms control pact, Russian Foreign Ministry spokeswoman Maria Zakharova described the idea as unfeasible.

The Pompeo camp’s attempt to sow discord between China and Russia so that Russia will join the anti-Chinese team is purely ridiculous!

First, Russia-U.S. relations are at their lowest point since the end of the Cold War, and they are unlikely to be restored quickly. The two countries not only are fundamentally opposed to each other over issues such as future development plans and international orders, but they have many conflicting interests: U.S. imposition of sanctions on Russia for invading Ukraine; NATO’s strengthening military deployment in central and eastern Europe; the two countries’ disagreement over Syria; and U.S. criticism of Russia for disseminating fake news. The two countries have limited room for compromise with such profound and complex disagreements.

Secondly, a considerable number of anti-Russian forces are present within the U.S. and are severely hindering the White House’s attempt to improve relations with Russia. Trump has still not visited Russia since he took office. In the U.S., many accuse Russia of meddling in the 2016 election. It is difficult for Trump to make any big moves in improving relations with Russia when he is accused of conspiring with Russian agents. Dmitri Trenin, director of the Carnegie Moscow Center, has pointed out that U.S. politicians are now more anti-Russian than ever, and that Trump is the only one who wants to approach Russia in the current administration. In addition, the Trump administration has been frequently inconsistent. Even if the Pompeo camp, which is loyal to Trump, put on a friendly face in order to improve relations with Russia, the Russians would hardly trust them.

Finally, it is by no means expedient to further the comprehensive strategic partnership between China and Russia. This strategy will not be shaken by external factors. Since the establishment of diplomatic relations over 70 years ago, the bond between the two countries has withstood volatile shifts on the international scale. The relationship is growing increasingly mature, stable, and strong; the bond between the two world powers boasts the highest degree of mutual trust, the highest level of collaboration and the highest strategic value. The leaders of the two countries share similar views on where the world is heading and how to govern. And most importantly, Russia and China have a highly consistent understanding of the strategic significance of their relations, and they share the same determination and desire to promote the continuous and in-depth development of these relations. Moreover, the people of both countries are on the same page with respect to sustaining these relations.

Pompeo’s poorly devised attempt to woo Russia in order to bash China completely runs counter to history. It is even laughable!