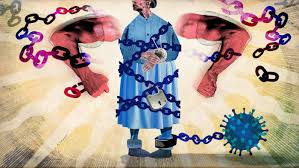 The number of deaths from COVID-19 in the U.S. passed 100,000 on Wednesday. This is the superpower’s greatest shame in over a century. It reflects the decline of the American political system and the government’s open malfeasance, but there have been no imprisonments or depositions of any officials because of it.

On Thursday morning, hours after the deaths reached 100,000, President Trump posted a tweet that was slow in coming, expressing his “sympathy and love.” It was clearly for show. A few hours before the number hit 100,000, the U.S. stock market closed high on all fronts. U.S. mainstream media reported prominently on the figure, but their voices were largely lost amid the busyness of daily U.S. affairs. Overall, the country passed the special 100,000-death mark with relative calm and apparent political indifference.

Previously, President Trump predicted that only 50,000 or 60,000 Americans would die, and later said that it would be 70,000 to 80,000. His newest statement was that 100,000 deaths was the result of exceptional work by his administration; otherwise, there could have been 1 or 2 million American deaths.

For the past few days, the focus of the U.S. government has been to attack China’s Hong Kong national security law. There has been cross-partisan support in Congress on this issue. They have been awfully busy preparing to sanction China. While a huge failing of human rights has occurred in the U.S., they are deeply concerned for Hong Kong’s human rights and freedom.

The Republican-led government successfully diverted the American public’s attention, turning China’s formulation of the Hong Kong national security bill into a more sensational story than the deaths of 100,000 Americans. Officials need only to speak harshly of China and prove that they are making efforts to “punish” the People’s Republic of China, and their blame to bear for the failure of the pandemic response in the U.S. seems to shrink.

What they want right now is to strike up sparks of anti-Chinese sentiment to blind and confuse the public. It’s an attempt to make Americans believe that currently the greatest human rights tragedy in the world is happening in Hong Kong, not in the U.S., where 100,000 people have already lost their lives because of COVID-19.

The flag of social Darwinism is flying high in America, while humanitarianism sits in a corner collecting dust. Today’s U.S. is allowing the elderly and poor to die; it has reasons to ignore them in order to make America great again.

One hundred thousand deaths is more than the total American military deaths from the Korean and Vietnam Wars combined, but because the lives stolen by the coronavirus are also the most silenced voices in the U.S., their deaths are now, in reality, being considered a “reasonable price” for breaking out of economic hardship.

With no grief for the deaths of 100,000 people, and with no reliable plan to prevent more deaths, the government is collectively and openly promoting an approach to let nature take its course, killing as many as it may. Watching from afar, the Chinese people truly never imagined that the developed nation we once looked up to was like this all along. What shocks us more is that even this situation hasn’t had any effect on how the country’s political elites reprimand China, which has successfully saved more lives, for destroying human rights.

It’s truly hard to discern if they are just pretending, or if they truly believe that 100,000 deaths is a small crime, while China’s Hong Kong national security bill is unpardonable. To sum it up, the U.S. is politically prejudiced beyond common sense. Even 100,000 deaths couldn’t shock the system back to reality.

The political parties’ games have led to collective American cognitive prejudice. Washington lectures the world on human rights and morality, but nobody there has pointed out the truth of what’s happening right now: Today’s U.S. is a tomb for the elderly, the poor and minorities.