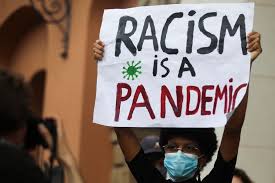 “I can’t breathe.” The last words of George Floyd, the black victim who was tragically pinned down and died under the knee of white police officer Derek Chauvin, have become a political slogan on U.S. social media platforms. However, it is not only that Chauvin strangled Floyd. There is a chronic and serious disease affecting the entire U.S.

The Floyd incident is sparking protests across the country.

President Donald J. Trump immediately did what he does best – find a scapegoat. Minneapolis leadership is largely Democratic, and the city lies to the left of the political spectrum. Trump is holding on to this fact as he plans direct attacks on his opponents, the Democrats and left-wing organizations. Using executive orders and Twitter, Trump is secretly turning this racist crisis into a political battle.

Trump repeatedly urged Democratic governors and mayors to “dominate” the protesters. He attacked Mayor Jacob Frey, calling him a “very weak Radical Left Mayor.” Trump tweeted that “the National Guard has been released in Minneapolis to do the job that the Democrat Mayor couldn’t do.” The president also announced he was classifying the radical left-leaning militant groups that resist white nationalists at demonstrations, collectively known as antifa, as a terrorist organization.

Let’s consider the Democrats. Former President Barack Obama issued a nice statement. But in fact, the former black president’s administration did not diminish discrimination against minorities. Democratic presidential candidate and former Vice President Joe Biden rejected Sen. Amy Klobuchar of Minnesota as a potential running mate because of her record as a prosecutor in Minneapolis. Biden is reportedly considering an African American woman as a running mate in an effort to highlight his difference from Trump.

In this distorted system where elections and money are everything, American politicians seem to have tunnel vision with respect to party infighting, politicizing issues and demonizing others.

The chronic disease that Floyd’s death has exposed has more to it. It is incredible that the police are the frequent perpetrators of racial terrorism in the U.S.

Ethnic differences in Minneapolis are deeply entrenched – African Americans are at a disadvantage whether with respect to education or wages. According to U.S. media, black residents account for only 20% of the city’s population. However, from the end of 2009 to May 2019, black people accounted for more than 60% of the victims of the city’s police shootings.

But the city of Minneapolis is only a symptom of this chronic disease. It is the law that gives the American police ample freedom to use force. Throughout the country, although deaths caused by police have repeatedly provoked public rage, investigators, prosecutors and juries have been reluctant to criticize the police afterward, advancing the privileges police enjoy and the arbitrariness of their actions.

According to data from the American Journal of Public Health, from 2012 to 2018, American police killed an average of 2.8 men per day. For every 100,000 African Americans and Latino Americans arrested, the death toll was up to 2.4 and 1.2 respectively, while the mortality rate of white people was 0.7 deaths of all white people arrested.

Some Facebook users in the U.S. posted the cover of Time Weekly in 2015: a black man running, followed by a swarm of armed police. The year in the headline, “America, 1968” is corrected to “2015.” Later, the year is again crossed out and changed to “2020.” The subheading is, “What has changed. What hasn’t.”

The cover story in this Time Weekly reported on the unusual death of Freddie Gray, a 25-year-old black man in Baltimore. In April 2015, Gray was taken into custody illegally. Before he died, the police ignored his call for help when he said, “I can’t breathe” after entering the police van.

In 1968, civil rights leader Martin Luther King Jr. was assassinated. In 2015, the Gray incident rubbed salt into that racist wound. Today in 2020, it is happening all over again in the United States of America.

The virus that is racism has been spreading in the U.S. over the years, and it has still not been eradicated from American society. It is no wonder that The New York Times published an article titled, “Two Crises Convulse a Nation: A Pandemic and Police Violence.”

There might eventually be a vaccine for the former, but racism will remain a long-term problem in the country. Floyd is not the first member of a minority to suffer a tragic death, nor will he be the last.

The U.S., which once claimed to be a model of Western democracy, is caught up in raging racial issues, a police system that violates human rights, and anti-intellectual party battles and elections. This country, which has been searching out enemies everywhere, should face the true enemy within itself.

When black protesters yell “I can’t breathe,” maybe they are voicing their loss of faith in their own country’s system.