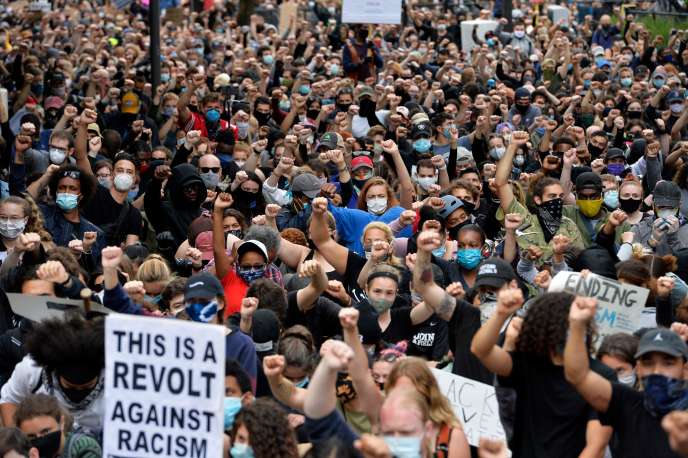 The George Floyd matter and the wave of protests that have ensued are putting America’s president on the defensive on two fronts — the pandemic and the issue of racism — which are far from being won, and on which his leadership has proven to be disastrous.

The intolerable spectacle of George Floyd’s agony, the 46-year-old African American man who suffocated under a white officer’s knee on May 25 in Minneapolis, Minnesota, unleashed more than just destructive riots.

The indignation provoked by the murder, caught live on camera, caused a new wave of protests in the United States against racism and police brutality: blacks, whites, Latinos, men and women, from the center-right to the radical left, all peacefully marching side by side across the country in cities like New York, Los Angeles and Seattle, but in a multitude of smaller cities as well. It is no longer an explosion of anger in black ghettos, as the country has encountered so many times in the past, nor a strictly militant mobilization; it is instead an in-depth, multiracial swell of opportunity.

As one single voice, Americans of all origins are not only denouncing racist blunders, but are also proclaiming the obvious fact that is too often forgotten: “Black Lives Matter.” That white individuals, who have ignored it by definition, are widely admitting that the simple act of being black causes fear among the police, and are horrified of such, is in and of itself a new development. The spontaneity of this national movement fueled by indignation reinforces the political sense: marches, organized single-handedly through social media, bringing in people with homemade signs.

This gratifying and civic jolt counters the hateful image that Donald Trump has given his country. The aggressive attack made by previous Secretary of Defense James Mattis against a president “who tries to divide us,” the perspectives taken in the name of the Constitution by the current holder of the position, Mark Esper, with the presidential threat of sending the National Guard to reestablish order, all reflect a vigor in the democratic debate and a certain isolation of Trump. Even if it is too early to predict Floyd’s impact on the presidential election due in five months, the current emotion and mobilization could change the equation.

Certainly, following Republican Richard Nixon’s example, who was elected in 1968 after the race riots resulting from the assassination of Martin Luther King Jr., Donald Trump can play on his firmness in earning respect for “law and order.” Of course, young black individuals disappointed by Barack Obama will struggle with mobilizing in favor of his ex-vice president, Joe Biden, who just won the majority of the necessary votes for his nomination as Trump’s adversary.

But Trump, who likes to set an agenda, finds himself nonetheless on the defensive on two fronts — the pandemic and the issue of racism — which are far from being won, and on which his leadership has proven to be disastrous: 110,000 deaths due to COVID-19 and an incapacity, it would seem, to recognize the reality of racism within the police force. Not to mention the worst economic crisis since the Great Depression of the 1930s.

Democrat Joe Biden, who recently emerged from the confinement of his home where he broadcast his addresses, needs to campaign in the flesh and prove that he represents a credible alternative to the president whose every word, every act since the murder of George Floyd, rings like a terrible call for a return to the old, racial, civil war in America.