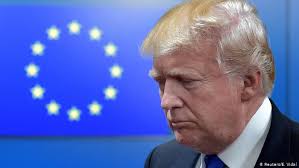 Trans-Atlantic relations have continued to break down under Donald Trump. Europeans are now aware of this. It is time for them to act.

For once we cannot blame the coronavirus. Relations between the United States and the European Union are going from bad to worse, and one man is essentially responsible for this ongoing deterioration: Donald Trump, the U.S. president.

This past week has been full of yet more contentious issues. It started on June 15 with a video conference between foreign ministers of the 27 EU member states and the U.S. Secretary of State Mike Pompeo. What were officially referred to as “exchanges” were, in reality, limited to a series of monologues, which in everyday language we would call talking at cross purposes. The absence of any results from this meeting is all the more unremarkable given that no one was really hoping for any.

Then, President Trump confirmed his commitment to limiting the American military contingent stationed in Germany to 25,000 troops from its current 34,500, meaning that 9,500 soldiers would be withdrawn. The American military presence in Germany is not exclusively meant to protect the country; it also serves as a base from which American forces are deployed to other areas. But Trump is nursing a number of grievances against Germany related to trade in particular, and has regularly demanded that Germany increase its defense spending. However, Trump’s latest decision came just after Chancellor Angela Merkel refused to travel to Group of Seven summit of major industrial nations in Washington at the end of June, which has since been canceled, something which one might consider to be retaliatory.

The next episode concerns Poland. For a long time now, Warsaw has been working to secure an American base on the eastern side of the EU, and was therefore quick to welcome the troops that had been withdrawn from Germany. Delighted to have the opportunity to create division in Europe, Trump invited Polish President Andrzej Duda to Washington on June 24. The fact that this visit comes four days before the presidential election in Poland, in which Duda is a candidate, does not trouble either of the two presidents, nor does Warsaw seem bothered by this obvious meddling in the Polish election campaign, not to mention Poland’s snub directed at Merkel.

Then on Thursday, U.S. Treasury Secretary Steven Mnuchin wrote to several of his European colleagues including the French asking them to withdraw from negotiations on the digital tax that the Europeans want to impose on Google, Amazon, Facebook and Apple. What’s more, Mnuchin warned them that countries who imposed this tax would be subject to American sanctions. Bruno Le Maire called this a “provocation.”*

It is difficult to disagree with European Union Foreign Affairs Minister Josep Borrell when he tells The Wall Street Journal that Trump’s relentless attacks on the EU which Trump believes was created to cause harm to the United States, have ended in the collapse of trans-Atlantic relations. The Europeans must now learn from this breakdown, and there is no time to wait for a possible victory by Democrat Joe Biden in November, who will not restore the status quo in any case. Europe must equip itself with what is needed for genuine foreign policy that is likely to serve their interests. France, Great Britain and Germany rightly stood up to Washington on Friday on the question of renewing sanctions related to Iran. It is in the European Union’s interest to make sure the agreement on Iran’s nuclear program is not buried.

*Editor’s note: Bruno Le Maire is a French politician and former diplomat serving as minister of the economy and finance since 2017.