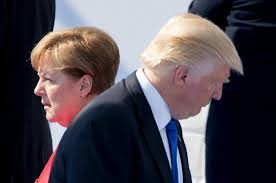 What U.S. President Donald Trump is carrying out with regard to Germany no longer has anything to do with the good trans-Atlantic partnership of yore. If he wins reelection, there will be nothing left to salvage.

The style is — as expressed in a German military idiom “unter aller Kanone” — beneath contempt. President Donald Trump has evidently ordered a reduction in the number of American soldiers in Germany without providing official notice to Germany. The vassal has to accept this.

A partial withdrawal is of no major importance for German security. The event is still alarming, as it demonstrates a continued disintegration of German-American relations. There is controversy over the U.S. withdrawal from the Intermediate-Range Nuclear Forces Treaty, the announced withdrawal from the Open Skies Treaty, dealings with Iran and the level of military expenditure. With increasing regularity, the Trump administration expects blind allegiance. With increasing regularity, the German federal government is no longer willing to offer it — which the man in the White House counters with renewed wrath. This no longer has anything to do with partnership.

Were Trump to win the election in November, the alliance would no longer be salvageable. Were he to lose, a new beginning would be conceivable in the spirit of relief.