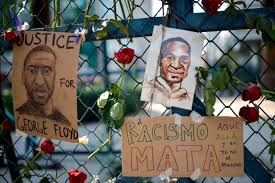 What happens in the U.S. does not surprise anyone. There is an irresponsible president who is reviving the “Law and Order” slogan Richard Nixon used to oppose the progressive initiatives of the 1960s, and who is willing to do anything to win reelection under the banner of an iron fist. He is faced with a conflict that reflects the problem of racial discrimination, the collapse of the welfare state which impacts low income populations, and the struggle to combat racism in police departments in that country. This conflict has given rise to levels of social protest not seen there for more than 50 years.

Two tweets that are circulating on social media illustrate the root causes of the conflict. One is by Gabriel Zucman. He says that while in 1980 the U.S. spent about 1% of the gross domestic product on policing and about the same amount on combating poverty, in the past decade the former rose to 2% of GDP, while only 0.7% was spent on the latter. The second tweet is from economist Mario Campa. He shows that in New York City, as a result of COVID-19, for every 100,000 African Americans, 1,500 got the disease and 600 died, whereas for white people, out of 100,000 people, 900 got sick and 300 died.

Clearly, the standard of living for the African American population is reflected in the difficulty they face dealing with the disease. This shows the structural implications of the conflict. The increase in inequality in the U.S. has been appalling. Angus Deaton has documented the drop in U.S. life expectancy between 2015 and 2017. White people in rural states have suffered loss, but African Americans in the cities have been hit even harder. White family wealth is 13 times greater than African American family wealth.

Keith Payne wrote “The Broken Ladder: How Inequality Affects the Way We Think, Live, and Die,” an influential book about the effects of inequality on society and on people’s lives. Payne cites studies that show how U.S. judges hand down harsher punishment the darker a person’s skin color is, even in cases involving the death penalty. Some 10% of men of color have served time in jail.

That could explain why George Floyd was murdered by a Minneapolis policeman despite the fact the city’s government has been developing a program to combat abuse by police. Yet that same city retained an officer with a history of improper conduct on the force. In Minneapolis, 60% of incidents of the use of force by police are directed against African Americans, who make up only 20% of the population.

In other words, the U.S. is spending increasingly more on police who are incapable of respecting human rights, particularly those of racial minorities, and at the same time, allocating considerably fewer resources for social programs that help to improve the quality of life in these communities. One important point Payne makes is that there is evidence of less racism in states that have less income inequality.

In Mexico, the ladder is even more broken than in the U.S., because here, racism remains invisible. Belonging to an ethnic group, speaking an indigenous language or having Indigenous features is an almost insurmountable social and economic disadvantage. That is also reflected in the abuse of police power and lack of access to justice. A landmark case of the abuse of police power is that of Jacinta Francisco Marcial.* How many cases are there of arbitrary arrest and unjust or excessive sentences against people with Indigenous features? Undoubtedly, the numbers are staggering, and they are not even considered worth noticing. In this context of extreme inequality, scholarships, programs for the employment of young people, the transfer of cash, goods and social services to persons with disabilities, and loans to microbusinesses would seem to be alternatives for counteracting the harmful effects of these inequalities. However, these alternatives must be implemented without setting aside the requirement for effective policies to combat racism, and they must be joined with an express plan to raise the collective consciousness.

*Translator’s Note: Jacinta Francisco Marcial is an Indigenous Otomí woman who was arrested in 2006 for involvement in the kidnapping of six agents of the Mexican Federal Investigations Agency. Amnesty International maintained that she was prosecuted because of her gender, poverty, race and inability to speak or understand the Spanish language. In 2009, prosecutors dropped the case against her, and she was released.

About Tom Walker 196 Articles
Before I started working as a translator, I had had a long career as a geologist and hydrologist, during the course of which I had the opportunity to work on projects in Mexico, Chile, and Peru. To facilitate my career transition, I completed the Certificate in Spanish-English Translation from the University of California at San Diego. Most of my translation work is in the areas of civil engineering & geology, and medicine & medical insurance. However, I also try to be aware of what’s going on in the world around me, so my translations of current affairs pieces for WA fit right in. I also play piano in a 17-piece jazz big band.