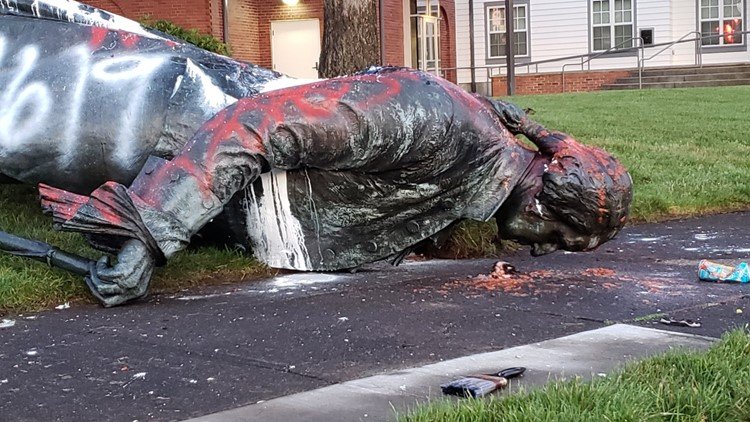 Not so long ago, President Donald Trump’s postulations that once the statues of Confederate soldiers and generals have been taken down, memorials to the Founding Fathers of the United States will also begin to fall seemed like idle exaggerations. Now these postulations are coming true. In Portland, protesters defaced a statue of George Washington with graffiti reading “Genocidal colonist,” “F- Cops” and “Big Floyd,” wrapped it in the American flag, set it on fire and pulled it to the ground. In New York, the speaker of the city council, along with other like-minded council members, appealed to the mayor to remove a statue of Thomas Jefferson from the city hall. As it says in their letter, “this statue serves as a constant reminder of the injustices that have plagued communities of color.”

In San Francisco, a statue of former President Ulysses S. Grant, who led the Union Army during the Civil War, was toppled — the police knew what the crowd was up to but didn’t arrest anyone. And even a statue of Francis Scott Key, the author of the lyrics to the American national anthem, hasn’t managed to escape the rioters.

It’s as if people have suddenly opened their eyes and realized that these remarkable citizens, who they once considered heroes, actually committed egregious crimes. Heroism has been canceled overnight.

The problem lies in the fact that Washington and Jefferson are worshipped, not for being slave owners but for making historic breakthroughs. Washington led the fight for independence and Jefferson formulated ideas about freedom in such a way that it particularly inspired abolitionists as well as all those fighting for liberty. So, what’s the most important thing here, their shortcomings or their achievements? And if their achievements are to be canceled out by their shortcomings, what will remain of the country, its history, its people? Without the unity of historical experience there is no nation. Only fragmented groups who are ready to erase history and live with myths remain.

If the task is to turn someone into a nonentity, then for that, of course, you need to deprive the person of his history. And it’s better to do so by disfiguring that person using their own hands and then, ideally, cheering about it under the guise of a liberation movement, which was created so that nobody would be able to remember the true meaning of the fight against oppression. In this sense, removing statues might, at first glance, seem like fighting a phantom, but this is not the case. Toppling statues gets the main job done — the violent obliteration of the idea of heroism as the extraordinary efforts of people who are striving for the greater good. In the current newspeak, Spiderman and all his relatives will be called heroes. Heroism remains, but exclusively in the form of mutation and cartoon-like superpowers, where heroes are not some kind of freedom fighter, but really cool spidermen, bat people, etc. If you’re a hero, you’re wearing a clown costume, or at least a mask, which coincides perfectly with the quarantine look. (Incidentally, the readiness to follow orders from above, and even searching for nicer looking masks, makes the American riots chime with those of the “heroic fighters” during the Euromaidan.) It was shameful for a hero of the past to hide his face — only executioners and bandits did this. The absurd and merciless carnival continues, and those people who have succeeded in making others believe that this is freedom and individualism are happily enlarging the ranks of brainless puppets, all amid the thunder of applause from many media outlets and politicians, who are portraying themselves as liberators and fighters.

The memory of those who are busy toppling memorials isn’t worth 1 cent, and they have no experience of the Occupy Wall Street movement. And even then, it was evident once again just how useless protest is when those protesting don’t know what to do with it. On the surface, everything will happen as usual; they’ll come together to motivate people and then scatter, only even more traces of the past, which could have become a lesson and a seed of hope for the future, will be trampled, destroyed and buried. It can’t be any other way when the statues of people whose thinking supported the need for equality among citizens and without whose efforts there would have been no victory over slavery are being brought down. The people who are currently “fighting” against the statues are setting up a new slave yard for themselves in the future. In making a mockery of the statues of the Founding Fathers, they are not expressing what they see as pent up, righteous anger, but pent up nastiness. They are not thinking about the fact that they will be lead to slaughter by those whose hands they are untying by putting lawlessness on a pedestal instead of heroism.

Even if it seems to them that they are now taking revenge for everything and that they have secured the legal right to retribution, they are actually preparing new slave quarters for their descendants in which no one will remember Washington, Jefferson or Grant. Only this time, the slaves will be driven in regardless of the color of their skin and, most likely, under the premise of lasting liberation.

As far as the American political apex is concerned, the paradox lies in the fact that this uproar is beneficial for both conditional Democrats and conditional Republicans. To the Democrats, the participants in this spectacle are erasing tradition, people who, by destroying the past, are simultaneously destroying their relationship to the future. To the Democrat ideologues, this process is itself nicer than all other tactical gains, something which has been proven by both the Arab Spring and the Euromaidan. But it also has its advantages for those conditional Republicans who support the idea of turning the U.S. into some kind of isolated economic and political entity. It’s worth noting that Trump expected the problem to result in riots, and has blamed governors for not dispersing the rioters, but he himself has not taken any firm action.

If Trump and his supporters really intend to isolate the U.S. and make it an “American bastion” over the course of current global transformations, they need to ensure discipline within this bastion, just like in a real, functioning fortress. And to do this, the most useful thing is to identify and eliminate any and all subversive elements which are now happily climbing into the intelligence community’s hands. But this is a blueprint for the future. Now, on both sides of the American political elite, attempts to make political gains are intertwined with the helplessness of those who are being forced to monitor the raging elements. We are not talking about a rift in society, but about the demolition of its foundation.